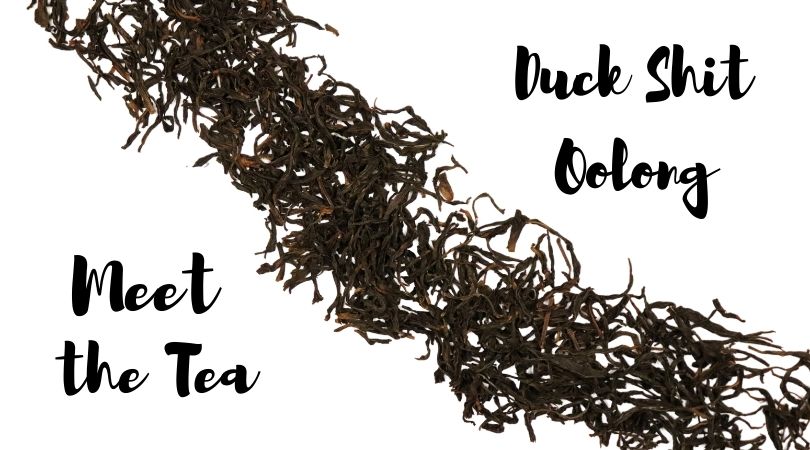 You read that right. There is a tea called duck shit oolong!

Ya Shi Xiang is a cultivar used to make a Dan Cong oolong by the same name, A lot of people in the US first learned about this tea when it was written about by Forbes in 2015. Unfortunately, they did not bother to include pictures of the correct tea in their article!

How Duck Shit Oolong Got Its Name

The Chinese name for this tea is Ya Shi Xiang. You’ll see Xiang used for many oolong varieties, especially Dan Cong. It is usually translated as fragrance or aroma. Ya Shi means duck shit so all together the name is duck shit aroma. As is sometimes the case with tea, the name is not quite what it seems.

There are a number of stories about how Ya Shi Xiang got its name. The one I see told most often is that the farmer who discovered it did not want neighbors to steal his tea so he gave it an unpleasant name. Another version says that the yellowish soil in the region where this tea is made is thought to resemble the color of duck excrement. Some will tell you that ducks relieve themselves under the tea trees.

There have been efforts to change the name to Silver Flower or Honeysuckle Fragrance but the novelty of duck shit oolong seems to have stuck. When I worked at a tea house that sold this tea, Ya Shi Xiang was one of the most popular solely because of the name.

After harvesting, the leaves are withered outdoors as well as indoors. The amount of time is determined by the weather that day and the water content of the leaves. The leaves are then placed onto large bamboo trays, shaken, and then periodically rested. They may also be rolled by hand. This process bruises the cell walls of the leaves which accelerates oxidation and helps to develops aroma compounds.

When the tea maker feels that the tea is ready the leaves are pan-fired or heated in an oven to halt oxidation. They are then dried at least two times in bamboo baskets over charcoal. The entire process can take over 24 hours but it is well worth the wait. Stems and off-colored leaves are manually removed before the tea is packaged for sale. It is common to rest this type of tea for a few months to allow the smokiness from the drying process to dissipate.

The finished leaves of duck shit oolong will be fairly dark in color with a slightly twisted shape. Occasional stems might be seen but they should not make up a large portion of the tea. Once unfurled, the leaves may appear much greener than they did when dry. Reddish edges are evidence of the partial oxidation.

Duck Shit Oolong hails from the Phoenix Mountains of Guangdong Province. Ping Keng Tou village is presumed to be its birthplace but it has spread to surrounding areas as this tea’s popularity has grown. This area is mid-elevation with an altitude of about 870 meters. It is known for its iron-rich soil, which is what gives it the distinctive yellow color. The mother bush located there is estimated to be over 80 years old. I was not able to find any pictures of it but if you know of any, please let me know.

If you zoom in on the map below you can see what looks like rows of tea bushes! I always try to include a map of approximately where the tea is from in my Meet the Tea posts but that is a first.

Duck shit oolong brews up a deep shade of amber without any cloudiness. Like many Dan Congs, the taste of Ya Shi Xiang is sweet and intensely aromatic. This is a tea that demands attention as it floods your senses. The dominant aromas are honeysuckle, jasmine, and gardenia. I’ve also noticed notes of honey and a mild fruitiness that reminds me of lychee. There is usually some astringency but the taste is well balanced. Earlier infusions often have a custardy creaminess that I really enjoy.

Use an aroma cup set when you are enjoying aromatic oolongs like Ya Shi Xiang. It will help you to appreciate all of the wonderful complexity that this tea has to offer. If you don’t have one, make sure to give your both the gaiwan lid and your empty cup a good sniff.

I recommend brewing duck shit oolong gongfu style with full boiling water. Cooler water will reduce astringency but you’ll be missing out on some of those amazing aromas. In a typical gaiwan, I will use 7g of leaves with infusion times starting at around 20 seconds. You can extend this as you go, especially for later infusions, to keep the strength consistent.

If brewing this tea in a more western style, I recommend using 3g of tea per cup and brewing for about 3 minutes. You’ll want to stop brewing while the tea is still golden. It will be more bitter once the liquor starts to turn reddish.

One thing you’ll notice about this tea is that it is a marathon drinker. If brewed gongfu style, you’ll be able to get a large number of infusions before it starts to fade. Take your time to notice the flavor, texture, and aroma differences as you progress through your session.

Looking for that Special King of Duck Shit Aroma?

What is Duck Shit Tea (Ya Shi Xiang)? A Dancong Oolong Tea

The tea that I photographed for this post is “King of Duck Shit Aroma” Dan Cong Oolong Tea from Yunnan Sourcing. For those that took my class on Dan Cong at the Chicago Tea Festival last year, this is the duck shit oolong tea that I served.

I can’t believe it has taken this long for me to write about one of my favorite teas. Have you ever tried duck shit oolong? Let me know your thoughts in the comments below!