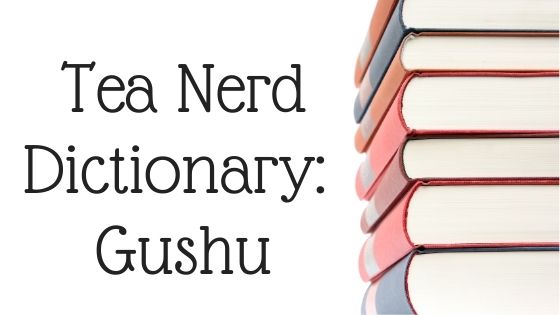 If you’re starting to dive into the fascinating world of puerh, gushu is a word you will encounter quite a bit. It’s a loaded term since there have been quite a few controversies because of it. In this post, I’ll do my best to define what gushu is and answer some of the most common questions about it. The focus will specifically be on puerh since it is seldom used to describe other categories of tea.

What is Gushu Tea?

Gushu is a Chinese word that can be translated to English as ‘ancient tree’. You might also see ‘old arbor’ used. When a particular tea is labeled as gushu, the company is communicating it was made with leaves from ancient trees. These are usually grown from seed in a forest-like setting with minimal human interference. Since they are not pruned, the trees get quite tall. People have to climb the trees to harvest leaves. Tea trees grow very slowly, so it would take 80-100 years to get anywhere near that size.

The trouble with the term gushu is that there is no standard for what is or is not gushu. As you might imagine, that leaves a lot of room for deception. Teas made from ancient trees can be sold for a much higher price, so there is an incentive to lie. I won’t name names, but there have been several incidences over the years where tea companies were caught falsely claiming their tea was gushu. This isn’t always malicious, though. If a producer in China tells them that the trees were a certain age, they might repeat that information to customers without verifying if it is true.

Many people do feel that gushu puerh is better. It’s similar to the organic vs. conventional farming debate. There are many reasons to grow food (or tea) organically but whether or not the end product will taste better is subjective. The age of the tea trees is not the only factor that determines quality, but I do think there is some truth to this argument.

Ancient trees have deeper roots, giving them access to nutrients that younger trees with more shallow roots can’t reach. They are part of the ecosystem rather than being grown as an isolated monoculture. I believe this is part of why you can really taste the terroir in puerh tea. There are subtle differences from one mountain to another. Some would argue that there is even a difference between two villages on the same mountain.

Can You Tell if Your Tea is Gushu?

This is a question that tea drinkers have struggled with for years. Issues with counterfeits exist for every type of well-known tea. When supply does not meet demand, enterprising individuals find ways to fill in the gaps. It really isn’t possible to know for sure if the tea you are drinking was made from ancient trees.

A good rule of thumb is that if it sounds too good to be true, it probably is. Low price is a huge red flag. Genuine gushu is expensive because there isn’t very much of it. The safest approach is finding a tea you like at a price you can afford from a company you trust. That will take some time to figure out. You’re likely to buy a fair amount of tuition tea along the way, but these are important lessons to learn.

Have you ever tasted gushu puerh? Do you think the age of the tea trees changes the taste? I would love to hear from you in the comments below!