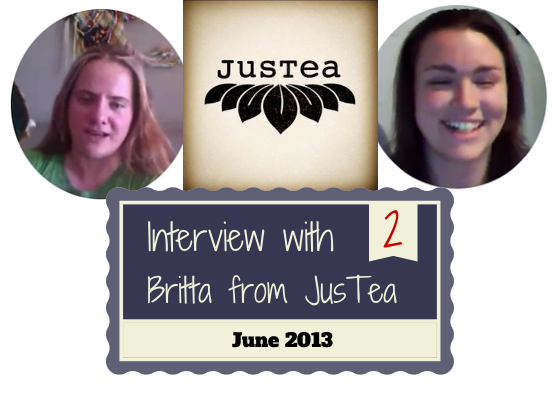 I know it’s been a while but I finally got around to filming another podcast episode. This time I interviewed Britta from JusTea, an exciting project that is currently fundraising on Indiegogo. I was really impressed with their story and their passion. Here is a bit about who they are followed by the video of our interview. After watching, please consider supporting them and help spread the word.

JusTea is a social justice movement wrapped in a social business. JusTea is partnering with small scale Kenyan tea farmers to empower them to learn how to hand process their own tea from the wet green leaf to whole leaf black tea and then buy their tea directly at a better than fair trade price.

Justea was the pet project of Grayson Bain, best known as one of the founders of Rocky Mountain Bicycles. It started out with a trip in Kenya and a desire to make a difference. Bain and some business friends were looking around in Kenya for something to get involved in. Bain relates: “My vision for starting JusTea was to practically connect the rich 5% world with the 95% – Who love, build and hope for, but have so little real connection to –  us, the 5%.  My vision was to enrich millions of tea drinkers by bettering the lives of thousands of African tea farmers. JusTea is also based on my love for creating businesses – over 20 to date! Businesses can keep building and sustaining those who are employed.  Businesses in third-world countries can be viable and profitable, and employ workers equitably; they don’t have to be a hand out or a sweat shop.”

However, the  whole establishment of JusTea can probably be put down to one chance encounter, meeting Davison. Bain says: “He was just some tea farmer we didn’t know. We asked Davison if he could give us a brief tour of his one-acre farm on our way. We thought we needn’t waste much of his time, just a quick stop for a cup of tea and see his tea plantation. But Davison’s peaceful spirit and joyful nature left an impression on us. After the first quick visit, we came back a week later. He stood at his gate with his arms outstretched, he pulled us close in embrace and said “Welcome back! Last time all you wanted to talk about was tea, tea, tea. This time, let’s talk about life in Canada. And your family – how many children do you have? Do you have time to talk?” All afternoon and into the evening we shared ugali, corn and tea…and our lives. We talked, laughed and cried together.”

But how does a chance encounter between a coffee drinking entrepreneur and a tea farmer lead to producing high quality hand crafted tea? Grayson would say it had the hand of God in it. Mostly it came about in ways that we hope to be able to continue in our work with JusTea: personal connections with people of passion. Britta Fluevog first became involved in the project while she was on a cycling tour between Vancouver, Canada and Bogota, Columbia. Her interest in the project strung from having started a ceramics centre in Ghana and being a consummate tea drinker. Isaiah Muuo was a pastor in Kenya and put us in touch with his old church members. Social justice, changing the way tea is processed and the way western business functions is something all the JusTea members shared.

It was a business relationship with Brendan Wayne, The Teaguy, that allowed us to really be able to move forward towards creating a top notch Kenyan Black Orthodox Tea.  Because the tea we produce had better taste VERY good!  We will strive for excellence in tea processing right at the small farm level. We will not be satisfied with our Kenya processing unless we have tea aficionados like the ones you are writing to saying “ The tea tastes complex and delicious”

We feel there is a real desire to have top quality fair trade teas in the western markets. We also feel there is a desire to know exactly about tea source and processing, as well as, who is farming them. We hope to be able to connect the farmers and drinkers far more than is available now.  We also need to live transparently, acting with integrity in the West and in Kenya.  Growing wealth for Kenyan farmers while expanding in healthy, strong relationships. We want to be able to have Kenyan farmers be able to interact with the tea consumers.  We at JusTea want to live building a world of justice and fair treatment for all people.

We are still in the beginning phase of our project. So far we have a dedicated team of volunteers working full tilt. We are in touch with tea processors. We currently have an indiegogo campaign running to raise the funds for the processor and building a tea studio. To support our campaign, we have a shipment of orthodox black tea coming in. We hope within a year to have the first shipment of our own tea coming in. Our first regional tea will come from Mt. Kenya. We are also looking towards Lake Victoria to produce a tea out of that region too. We hope in the future Kenyan tea, won’t simply be Kenyan tea, but each region will be able to produce its own distinct tea.
We see our crowdfunding campaign as a vital step towards where we are headed. Grayson’s son, Paul Bain, bachelors in International development,  says: “As the Kenyan Liaison, I envision this Indiegogo campaign as the start of a long term experience: With farmers discuss starting the Tea Studio Production facility; With other tea drinkers on new ideas for Kenyan types of tea; With online projects for soil and crop improvement; With Tea Safaris – volunteerism journeys for tea lovers” JusTea is also looking for a community of people, a crowd of people: Also known as Crowdsourcing. We believe that there is a community of kindred spirits: People that will move mountains to achieve a noble purpose. We want to work together to redevelop what a business can look like.

Click here to learn more about JusTea and to find out how to support its mission.