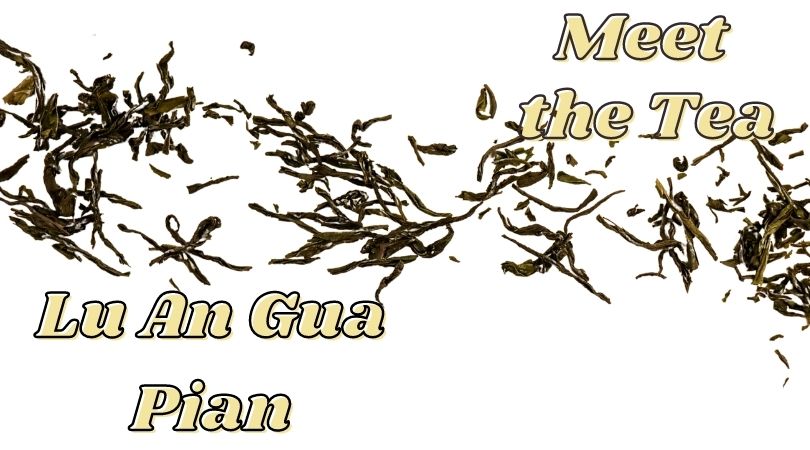 Lu An Gua Pian is one of the more unusual Chinese green teas so I thought it was a perfect choice for the next installment of Meet the Tea. It is made without any buds or stems, but don’t let that fool you! It is a high-quality tea with a long history and it takes a lot of effort to make.

Lu An refers to the area of Anhui Province where it comes from and Gua Pian is usually translated as melon seed. The original name was Gua Zi Pian (sunflower seed), an homage to the shape of the leaves. It was gradually shortened over time, leading to a mistranslation.

Here’s everything you need to know about this special tea.

How Is It Made?

Chinese green teas usually focus on tender buds, but Lu An Gua Pia green tea is made only with the first full leaf after the bud set. The leaf is removed from the plant without taking the stem. As you can imagine, this plucking standard takes quite a lot of work to make enough finished tea. It is also usually harvested after tomb-sweeping day because of this practice.

After harvesting, the leaves are withered and then fired in woks to halt oxidation. This is followed by a second firing where the leaves are stirred with a straw broom. It is this step that rolls the leaves into their distinctive elongated shape. Once the desired shape is achieved the leaves are carefully dried over a charcoal fire several times to remove residual moisture.

Luan Gua Pian comes from the mountains surrounding Lu’An City in China’s Anhui Province. A combination of warm weather, abundant rainfall, and rich soil make it a perfect place for growing tea. You will often see the production area for this tea divided into the inner mountain or outer mountain.

The inner mountain area is deeper into the Da Bie Mountain Range and is generally considered to have higher quality tea. Bian Fu Dong (Bat Cave) located in Qi Yun Village is particularly known for making Lu An Gua Pian. The outer mountain area lies nearer to the Yu’an District of Liu An City.

The history of Lu An Gua Pian is a subject of debate. Some say it was mentioned in Lu Yu’s Classic of Tea. It is often listed as a tribute tea for the Ming and Qing Dynasties Still others say that it was developed in 1905 by an enterprising tea maker. Tea styles and processing methods evolve over time so it’s nearly impossible to pinpoint an exact time of creation. During my research for this post, I found it interesting that this tea was presented as a gift to Henry Kissinger in 1971 during a visit to China.

Lu An Gua Pian brews up a luminous greenish gold. This tea has a way of really capturing the light around it. The unique processing results in a taste that is quite unlike other Chinese green teas. It has a rich, almost brothy flavor that is vegetal without being grassy. There is a savory umami quality to it that reminds me very much of gyokuro. There is just a hint of smoke from the charcoal firing. The mouthfeel is thick but less soft than other bud-heavy teas. Good quality Lu An Gua Pian should have no bitterness.

How to Brew Lu An Gua Pian

Lu An Gua Pian is one of the least delicate green teas that you will come across. That makes it a good candidate for just about any brewing method. For western-style brewing, I recommend using 2g of leaves for every 8 ounces of water. Infuse in 185℉ for 3 to 5 minutes. The larger leaves make it work well for grandpa style. I also really like to cold brew this tea.

Lu An Gua Pian can be made gongfu style in a gaiwan, but I actually prefer it in a glass gong dao bei instead. This method shows off the leaves while giving them plenty of room to open up and allowing excess heat to dissipate. Let your eyes be your guide. Once the leaves start to unfurl and soften, strain the liquor into another pitcher for serving. Leave just enough water inside to cover the leaves. This helps to maintain a strong and consistent flavor for subsequent infusions.

Where to Buy It

I did not discover Lu An Gua Pian until I was already several years into writing this blog. Thankfully, it has become much more accessible since then. Here are some of my favorite companies to source this tea from:

Have you ever tried Lu An Gua Pian? What is your favorite way to brew it? Let me know your thoughts in the comments below!