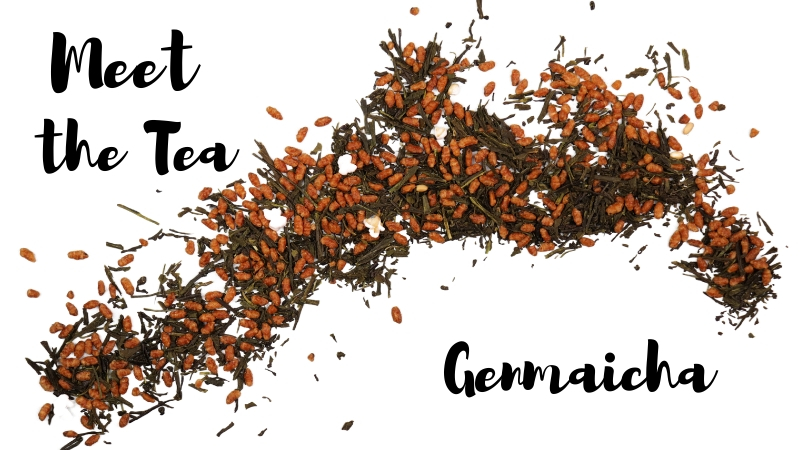 Genmaicha (brown rice tea) is a blend of Japanese green tea and roasted rice. They are typically mixed in a 1:1 ratio so the caffeine is somewhat lower than other green teas. No one is sure exactly how this tea came to be. The most probable story is that adding toasted rice helped poorer families to stretch out the leaves when tea was still considered a luxury item. Another version is that it was invented by a shop in Kyoto for the same reason. Regardless of the origin, it is a delicious tea!

Although the name means brown rice Genmaicha is most commonly made with white mochi rice. During processing the rice is dried with hot air, causing some of the pieces to pop. They resemble teeny tiny popcorn pieces. Some companies will add more of these for aesthetic purposes but it does not affect the taste much.

The base tea is typically bancha, a lower grade of Japanese green tea. After harvesting the tea leaves are steamed to stop oxidation. They are then dried and rolled into a needle-like shape. It is important to note that the toasted rice being added occurs post-processing so this is usually not done by the tea grower themselves.

Bancha is a bit rougher as it is made with later flush leaves. That has changed a bit in recent years as I have come across sencha, gyokuro, and hojicha versions. You might also find it dusted with matcha. This is called matcha-iri genmaicha.

Genmaicha is made throughout Japan. The tea that I photographed for this post is from Shizuoka. It is the largest tea production region, accounting for about 40% of the country’s output.

Genmaicha is an interesting combination of sweet and savory. The Japanese green tea has the vegetal and umami notes that you might expect but the rice adds a nutty, toasty sweetness. The combination is very comforting, making this tea my go-to on cold, rainy days or for when I’m not feeling well. Bancha can be more astringent than higher grade teas but the rice softens this aspect a bit.

Genmaicha can be brewed in much the same way that you would any other Japanese green tea. A general rule of thumb is 2.5g (or 1 teaspoon) of leaves for every 8oz of water. Since this is a green tea, your water should be not quite at boiling. Every tea seller will have a different recommendation but most will range between 175 and 190 degrees Fahrenheit. Infusion times are usually 1 to 2 minutes. Don’t be afraid to experiment on your own though! Bancha is not nearly as sensitive as gyokuro or deeply steamed sencha.

If you’d like to your hand at making your own genmai to blend with tea, Ricardo from My Japanese Green Tea has a great how-to for that.

Have you ever tried genmaicha? Are you a fan of its toasty sweetness? Let me know about it in the comments below!