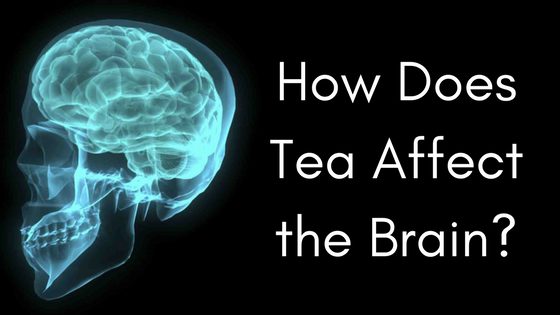 As many of you know I’m pretty strict about not covering health benefits here on the blog. They aren’t why I drink tea and in most cases, I think they are overemphasized for marketing purposes. That being said, it is undeniable that tea affects our bodies in many ways. I thought it might be interesting to dive a little deeper into what substances in tea do to the human brain.

Caffeine naturally occurs in tea and is partially responsible for the bitter taste that we experience. It is structurally similar to adenosine, a neurotransmitter that plays an important role in regulating sleep cycles. Adenosine builds up over the course of the day, triggering our bodies to rest. Caffeine binds to adenosine receptor sites in the brain so that rather than slowing down we feel energized.

Luckily for us, this effect is not a permanent one. The body will create new adenosine receptors if the existing ones become blocked. Just as with many other drugs, this is why people can become addicted to caffeine. The body demands more and more of the substance in order to achieve the desired effect. It is also why we might experience withdrawal symptoms if our brains are deprived of caffeine. This seems to be less of a problem in tea circles than it is with the coffee crowd but it’s still important to make sure that we don’t overdo it. According to the Mayo Clinic, a healthy adult can safely consume up to 400mg of caffeine per day.

L-Theanine is an amino acid which relaxes the central nervous system and promotes alpha brain wave activity. This can lower anxiety and help us to feel more relaxed. It also increases the levels of dopamine and GABA in the brain. Given what we now know, it isn’t so surprising that tea has been so intimately associated with zen and meditation throughout its history.

Studies have found that it is more effective when combined with caffeine (aka tea!). Shade grown teas such as matcha and gyokuro contain higher levels. L-Theanine is almost exclusively found in the Camellia Sinensis plant. Scientists have only found it in two other sources, guayusa and a species of mushroom.

EGCG, or epigallocatechin gallate, is a polyphenol that receives a lot of the attention when it comes to studies on the health benefits of tea. Although conclusive studies are still needed, some studies have found that EGCG has the potential to prevent oxidative damage to brain cells, increase neurogenesis, and improve working memory. It’s important to note that the FDA does not allow health claims to made about tea. Retailers can reference studies but the wording must be very careful in order to avoid legal hot water.

GABA, or gamma-Aminobutyric acid, is a neurotransmitter that plays a role in reducing excitability in the central nervous system. The level of GABA increases if the leaves are oxidized in a nitrogen-rich environment. This process was originally developed in Japan as a method for preserving food. Teas labeled as GABA should contain at least 150mg per 100g of leaves. Although I can’t say that I’ve noticed any benefits from drinking GABA tea, they have a unique fruity taste that is worth exploring.