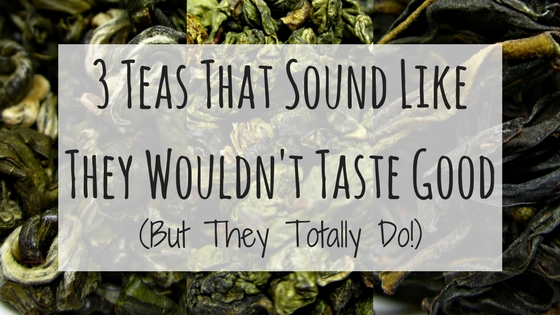 Mandarin can be quite a bit more poetic than the English language so sometimes things get lost in translation. I thought it might be fun to explore a few teas whose names might sound a bit odd when we first hear them. Rest assured, every one of these teas is actually quite delicious. Here are three teas that sound like they would not taste good.

Bi Luo Chun, or green snail spring, is a green tea from China’s Jiangsu Province with a seemingly innocuous title. Did you know that it used to go by Xia Sha Ren Xiang? The literal translation of this name is “scary fragrance”. Legend has it that a tea picker ran out of space in her basket, so she placed some leaves between her breasts (because that’s totally where I would put them 😜). Her body heat caused a surprising aroma to emanate from the leaves. Luckily for us, the Kangxi Emperor decided that the tea needed a more elegant name and renamed it Bi Luo Chun.

Pro Tip: High-quality Bi Luo Chun has very small leaves that are almost corkscrew-shaped. Rather than placing them into the vessel and adding water, try filling your vessel with water first and adding the leaves gently on top. They’ll sink to the bottom all on their own, and you’ll have a beautiful show to watch. The better the tea, the faster they will fall.

Mao Xie is an oolong variety that hails from Anxi, Fujian Province. It translates roughly as “hairy crab”. I know what your thinking. Hairs and crabs are both things we usually avoid having in our tea. The name supposedly came because the underside of the leaves is covered with silvery hairs (the good kind, called trichomes). These hairs will sometimes break off of the leaf and float on top of your cup. Don’t worry. They’re safe to ingest and actually help to make the mouthfeel of the tea smoother.

Growing up crabbing with my dad in the summer, I can verify that crabs might be hairy, but they don’t really bear any resemblance to tea otherwise. If you’re a fan of other rolled-style oolongs from this region like Tie Guan Yin, this is definitely one to try. I find that it has a savory creaminess that really sets it apart. It is usually made in a more modern style, a bit on the greener side with a moderate roast.

Ya Shi Xiang probably wins the award for the tea that is the most fun to say. This Phoenix oolong from Guangdong Province’s name literally translates as “duck shit aroma”. Legend has it that the farmer who discovered this variety didn’t want anyone to steal it. To stop would-be thieves, he named it something no one would want. Another version says that it is named after the yellow soil in the region where it is found. Ducks are frequent visitors to the tea gardens and will sometimes leave…deposits under the trees.

Don’t let the off-putting moniker fool you. This tea is actually quite sweet with floral and fruity notes. This tea has higher oxidation levels along with a traditional charcoal roast. Some have been trying to change the name to “silver flower,” but that doesn’t seem to have stuck.

Are there are any teas that sound like they would not taste good that I missed? Let me know about it in the comments!