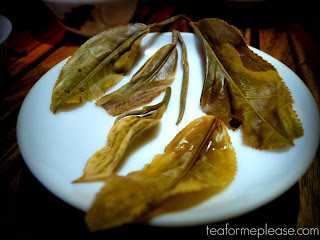 I’ve been on a major puerh kick lately and the selections that I’ve tried from Wild Tea Qi have been a big part of that. This one is unusual in that it was a raw loose tea, not pressed into a cake as you might expect. I was immediately struck by how aromatic the steeped tea was. My mother even took notice and she usually only comments on strongly flavored teas. The taste was sharp and vegetal but not overly astringent. Woody notes dominated and a sweet lingering finish kept it from being too overbearing. I did four consecutive infusions which about my maximum with a powerful raw puerh like this one. I had this tea straight after a butter saturated breakfast and it really did the trick to get my digestion moving again. The leaves after steeping were gigantic and absolutely beautiful. I couldn’t resist pulling a few out of the gaiwan to photograph. I often forget to document my tea experiences in this way but I always really enjoy it when I do.