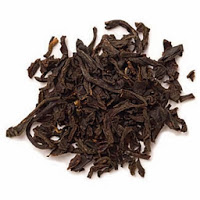 I’m not often a fan of bergamot because I usually find its strong citrus flavor overwhelmingly caustic. This particular rendition is a blend of black teas from Assam, Ceylon and Darjeeling. I was pleasantly surprised to find that it was very well balanced. I think a big part of that is the quality of the leaf used. The taste was robust and earthy, even underneath the very strong flavoring. It definitely still had lots of classic early grey flavor but the finish was cooling rather than heading towards the burning sensation that I usually experience. The steeping directions suggest between three to five minutes. I was conservative given my previous bias so go for five if you like a really strong cuppa. You could add a touch of sweetener to this if you wanted to but dairy is always a no no when it comes to mixing with citrus in my book. I love being surprised by a tea and this one did exactly that for me. It’s not something that I’d drink all of the time since I tend to prefer unflavored teas but now I know that I do have a go to for earl grey. Kudos to The Republic of Tea for doing an awesome blending job.

Earl Greyer sample provided by The Republic of Tea.