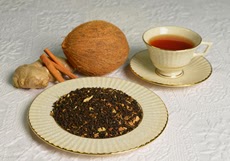 Nothing beats a good basic chai but the coconut in this blend adds an interesting twist. The base black tea was earthy and full bodied with plenty of astringency. I thought that the spices were well balanced and the black pepper provided a nice bit of kick. Although it could stand up to milk and sweeteners, they really aren’t necessary. I do not use either one unless I am boiling the leaves in milk on a stove top. If you are not a fan of coconut, don’t be afraid to try this one. The flavor was very subtle and it came across in a natural, fruity way rather than artificial sweetness. On the day that I reviewed this tea it was absolutely freezing outside and all of those comforting spices really hit the spot. This is the second tea that I’ve tried from +Sharon Levy at Taking Tea In Style and so far I have enjoyed them both very much.