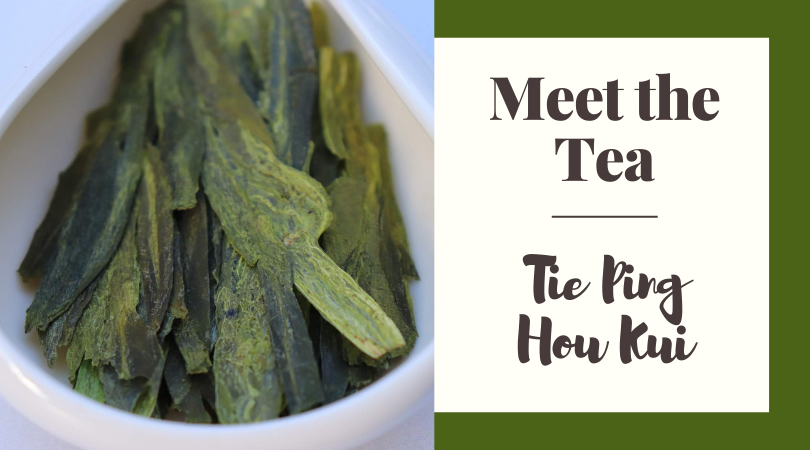 Tai Ping Hou Kui has long been one of my favorite Chinese green teas. The distinctive leaf shape was what initially drew me to it but I also love its sweet, mellow character. It is usually featured on the lists of China’s most famous teas and its history dates as far back as the Qing Dynasty. This tea is produced in the foothills of Huangshan in Anhui Province, China. The traditional production area includes just three villages (Hou Keng, Hou Kun, and Yan Jia).

The name Tai Ping Hou Kui is most often translated as peaceful monkey leader. You might ask yourself, what does that have to do with tea? A local legend holds that the monkey king fell ill and died after losing his son. A farmer discovered his body and carefully buried it. Tea trees grew from this spot the next year and the farmer harvested the leaves, making them into the distinctive blade-like shape.

Tie Ping Hou Kui is made using Shi Da Zhong, a variety with particularly large leaves. The tea undergoes most typical green tea processing steps, including pan firing. The leaves are initially shaped by hand in a wok before they are individually laid between mesh screens. The tea is then pressed between the screens, flattening them to complete the final look. This step can be done by hand but mechanical rollers are much more common. An impression of the fabric can be seen on the surface of the leaves which always makes for a fascinating tea session

The taste of Tai Ping Hou Kui is sweet with vegetal and floral notes. There is also a savory lean that almost has a sencha-like umami. Although fairly delicate, there isn’t much danger of over-steeping. When I first heard about this tea online, I just had to try it. I dragged my husband to Bellocq Tea Atelier in Brooklyn because they were the only place nearby that carried it. The enthusiastic staff there said this tea tasted like jumping into a pile of fall leaves. That fun sensory memory pops into my head any time that I drink it.

I suggest using a glass brewing vessel because the leaves of Tai Ping Hou Kui are quite beautiful to watch. The taller it is, the better you’ll be able to view them. 175 degrees for 3 to 5 minutes seems to be the average from western style brewing. The recommendations of the retailer you are purchasing from is always a good starting point. Those extra-long leaves are tricky to brew in a gaiwan. Glass tube style brewers are popular for that reason but a cha hai will fit the bill as well. My go-to method will always be grandpa style. I just love watching the large leaves dance in my cup.

Have you ever tried Tai Ping Hou Kui? What is your favorite way to brew it? Let me know in the comments below!