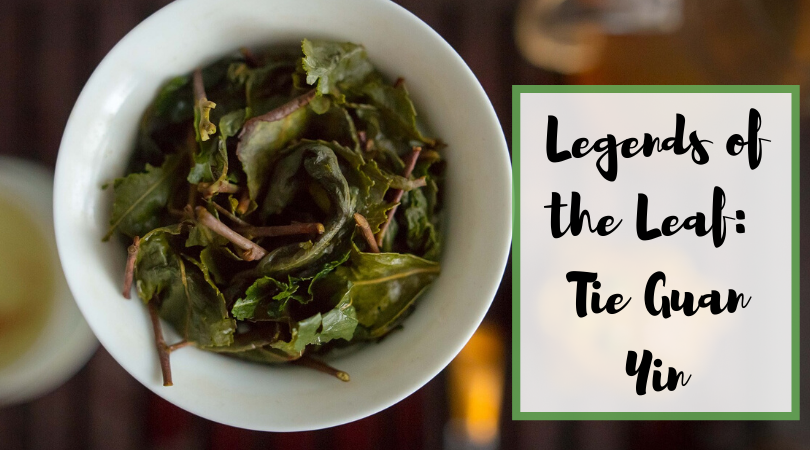 Tie Guan Yin is a tightly rolled oolong that originated in the Anxi Province of China. This type of tea requires a high degree of skill to produce because there are many complex steps of rolling and roasting. It is named after Guanyin, also known as the Goddess of Mercy, a Bodhisattva that is usually depicted as being female.

Legend has it that there was once a poor farmer who cared for a rundown temple that held an iron statue of Guan Yin. Every day he worked to clear the overgrown weeds and to make repairs to the crumbling structure. One night she appeared to him in a dream and told him to look in a cave behind the temple for a treasure. Inside, he found a single tea seedling. He shared cuttings of this plant with his neighbors and his village prospered.

There are many different versions of this tale but the basic story is generally the same. To this day Guan Yin has a close association with tea, especially oolong. I have a small statue that I have kept on my tea desk for many years.

Some say that the iron part of its name was inspired by the rolled shape of the leaves, making them look like gunpowder pellets. I’ve also seen stories that told of an Emporer being impressed with the weight of the tea.

A note for English speakers: Tie is pronounced like “tea”. It took me a few years to learn that one! There are a few different ways to translate Chinese so you will also see it being spelled Ti Kwan Yin. Tie Guan Yin, the Pin Yin transliteration, is generally considered to be more correct.

Tie Guan Yin is sometimes sold under the name of monkey picked tea. The name is meant to imply that it is a higher quality tea.

What is your favorite tea legend?