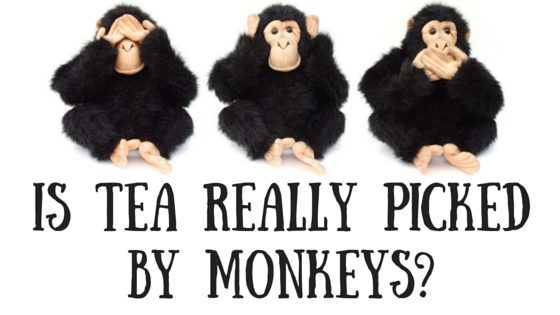 One of the oldest myths in the tea world is the one about tea being picked by monkeys. The usual story goes that since the best leaves grow at the top of the tree. Monks trained monkeys to climb to the top and pick the tea for them. Another version says that they would anger the monkeys, causing them to rip off branches and toss them at the monks below. I hate to break it to you all but this fable is simply not true. Chinese tea culture is full of myths and legends that may contain grains of truth. Unfortunately, this is not one of them. Although monkeys are intelligent they do not have the ability to selectively harvest leaves the same way a human can.

Where the Myth Came From

So where did this story even come from? Most of the sources that I’ve been able to find put the blame on Aeneaus Anderson. He accompanied Earl George Macartney on a visit to China in 1793. According to John C. Evans’ Tea in China: The History of China’s National Drink:

Questions not meant to be answered were met with blank, uncomprehending stares. Tea plantations spread out to the horizon on each side of the Imperial Canal but tea harvesting, processing, and even transportation were purposely kept from view. When information was volunteered, it had to be treated circumspectly. Once a Chinese man spontaneously offered to explain how tea was picked. He told Anderson ‘Tea growers anger the monkeys living in the branches of the tea trees. Out of revenge, the monkeys tear off branches and throw them on the ground. In this way, tea harvesters only have to pick them up.‘” Anderson truthfully admitted he had not witnessed the monkey-harvest himself although he nevertheless accepted the story as fact. All of Europe read Anderson’s book and the monkey tea-picking legend found its way to the West. This story had a particular appeal and fascination for the Victorians, no doubt due to the furor raised by Darwin’s theory of evolution. For over a century, children’s schoolbooks contained the story, and several generations of adults were convinced that tea was actually picked by monkeys.

He carried the story home with him to England. It was accepted as fact since he wasn’t able to visit the tea producing areas himself. It has been parroted by a good portion of the world’s tea companies ever since. If you enjoy historical texts, I recommend checking out his account A Narrative of the British Embassy to China. Tea production and drinking methods are mentioned a few times but I didn’t find any references to monkeys.

Is there any truth to the story?

I think the biggest proof of this myth being bogus is the lack of drawings or photographs. In researching this article I only found two. The one pictured above is public domain. The other is owned by Getty Images and they wanted quite a big chunk of change for usage rights. Both appear to be of English origin. Tea culture and history in China is very well documented. If there had actually been monkeys picking tea, I definitely think there would have been some record of it.

One explanation that I found is that the term was originally used to refer to poorly picked tea. These days tea labeled as monkey picked it is likely to be Tie Guan Yin, an oolong produced in Anxi. You may also know it as Iron Goddess of Mercy. Some retailers use monkey picked oolong as a moniker to designate their highest quality teas. In this sense, it is really just a name that is used for marketing purposes.

Have you ever tried monkey picked tea? Let me know about your experiences with it in the comments!