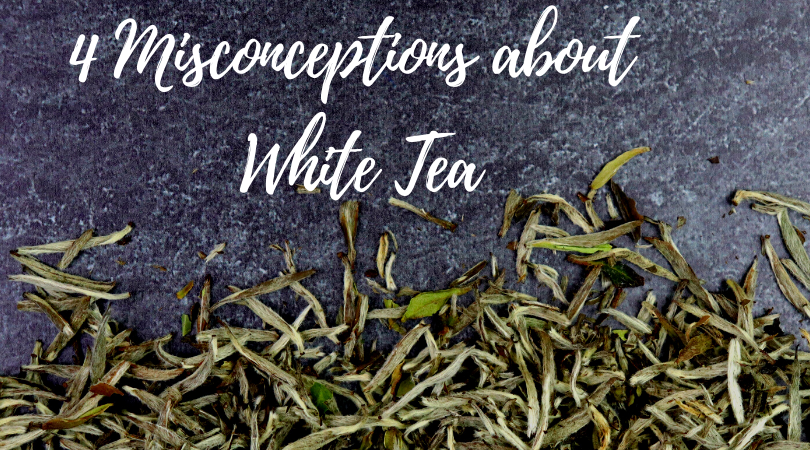 There are a lot of misconceptions about white tea out there. I don’t know about you but they make me cringe when I hear them! I still see these repeated by tea companies and even in books on tea.

Is Silver Needle harder to make than other varieties that use larger leaves? Is the production of white tea smaller than broader categories like oolong? Absolutely! That being said any tea that can be readily found in the western market is NOT rare. This is even truer when that tea has been carried by large chains like Teavana and David’s Tea for years. Calling a tea rare is solely a marketing tactic to get customers to buy white tea. Austin Hodge from Seven Cups Fine Chinese Teas wrote about an interesting explanation for how this myth started. Aging compressed white tea has become so trendy in recent years that I think we’ll actually see an increase in production.

White tea has historically been marketed as being lower in caffeine than other varieties. We now know that this is not necessarily true. Caffeine is actually concentrated in the buds because it acts as a natural insect deterrent. Knowing this bit of information, shou mei will definitely be lower in caffeine than a high grade of silver needle even though they are both white teas. I think part of the root of this myth is that white tea is higher in L-Theanine. This amino acid relaxes the brain so it may act as a counterbalance to the stimulating effects of caffeine. For those wanting more in-depth information, I highly recommend checking out the caffeine analysis in Tea: History, Terroirs, and Varieties.

White tea is sometimes referred to as the least oxidized type of tea. This is definitely not true but first, I want to make it clear that oxidation is not a bad thing. Our cells oxidizing? A normal process for the human body. Tea oxidizing? This will change the taste was but does not mean that oxidized tea is to be avoided.

Heat is not directly applied to stop oxidation during traditional white tea processing. Instead, the leaves are withered and then dried in the sun. Depending on weather conditions that can happen fairly quickly or take several days. This is particularly true for “moonlight” white teas that are made in Yunnan. While processing is minimal compared to something like a rolled oolong, some natural oxidation is inevitable. The leaves will be covered in silvery hair on top but their undersides might be darker in color.

Many tea vendors will recommend babying your white tea with very low-temperature water. While there are certainly times that this results in a better cup of tea, there is a dirty little secret in the industry. The faults in tea are less apparent when you brew it gently. If the tea is poorly made you are less likely to taste that in the cup if your water temperature doesn’t go above 175° F.

This rule can be applied to just about every category (with the possible exception of matcha). Good tea should always be able to stand up to boiling water. Leaf volume and infusion time can always be adjusted to taste but if you can’t use truly hot water, that is a big red flag. Take a walk on the wild side and brew your white tea with hot water. You might just be surprised at the result!

Are there white tea misconceptions that should be added to this list? Let me know about it in the comments below!