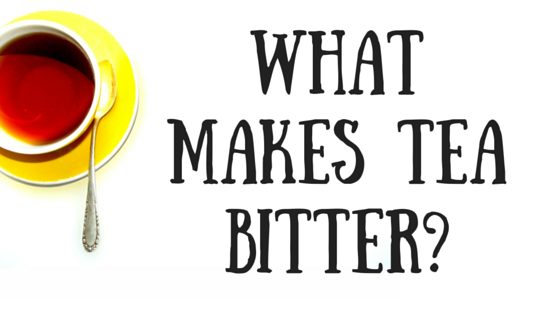 What makes tea bitter? All tea (Camellia Sinensis that is) naturally contains substances that can produce bitterness in the brewed cup. When people say that tea is bitter, they are most likely referring to astringency. This is usually described as a dry, mouth-puckering feeling. Astringency has different levels and for many types of tea, particularly black teas for the western market, it is a desired trait.

Caffeine in its pure state is extremely bitter. There is probably more research on this when it comes to coffee but that’s not really my forte. The amount that ends up in your cup can vary widely between teas. Contrary to popular belief the type of tea really doesn’t determine how much caffeine there is in the final product. There are a lot of factors including how much rainfall the tea plants received and the quality of the soil in which it was grown.

Catechins and other polyphenols (including trace amounts of tannins) are also major contributors to bitterness in tea. That’s right, antioxidants! Flavanols, also known as tannins, are converted to thearubigins during enzymatic oxidation in black tea. They are present in other tea types but in lower numbers. Higher amounts of tannins can cause the tea to be perceived as bitter. Tannins have no relation to tannic acid so don’t worry, tea will not turn your insides into leather. However, there is some evidence that they can interfere with the absorption of nutrients so drinking tea with food isn’t always recommended.

Now you might ask yourself, how do I prevent my tea from tasting bitter? There’s a few factors that are most likely the culprit.

Reduce the amount of leaf that you are using.

The general rule when it comes to loose leaf tea is 1 teaspoon for every 8oz of water. That being said, teaspoons are a rather inexact unit of measure. Every tea is a bit different because they come in a variety of shapes. When it comes to gongfu brewing methods, I will use about 5-8g of leaf in an average-sized gaiwan.

It often surprises people when I tell them that certain types of tea require different water temperatures. This is especially important when it comes to green tea. The lower your water temperature, the less bitterness there will be. The hot water extracts other important components so don’t go too far but experiment with bringing it down a notch. Cold brewing will reduce the astringency even further.

Brewing your tea for too long will also cause bitterness. I can’t tell you how many people I talk to at work who have no idea that they need to actually remove the leaves from the water. The longer your tea brews, the more bitter it will be. Start with the time recommended by the company where you purchased your tea and then adjust to personal taste from there.

Teabags work because the small particles have an increased surface area that comes into contact with the water. This extracts color and flavor very quickly. The same can be said of whole tea leaves that get crushed or broken. If finishing up the remnants at the bottom of a tin, I recommend reducing your steeping time accordingly.

Last but not least, it’s very possible that the tea you are trying to salvage just isn’t very good. There is nothing that will fix old, cheap, or low-quality tea leaves. I promised that I’m not saying that to be a tea snob. Drink what you like. But if you don’t like what you are drinking, it’s a great motivation to upgrade your selections