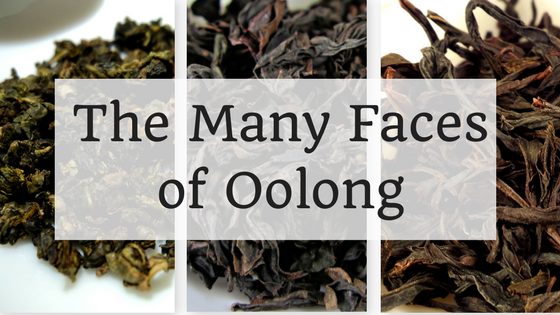 Whenever I get asked what my favorite tea is, I usually cheat and say oolong. That’s because oolong is one of the largest and most diverse categories of tea. Oxidation levels can range from around 8% all the way to nearly 80%. That means that the taste can also vary but from very green to so dark that you might think it was a black tea. You also might see this type of tea referred to by the traditional Chinese name, Wu Long, which translates as “black dragon”.

I thought it might be fun to do a run-through of the many faces of oolong for those of you that are just starting to toe the waters. The style of the leaf often categorizes oolong, so we’ll so start there. Names can be a bit trickier as they vary quite a bit depending on the origin.

For a lot of tea drinkers, the first oolong that we experience is the rolled kind that can be found in certain regions of China as well as Taiwan. This style of tea is created through multiple rolling steps. In the past, this was done by hand (or by foot!) but machines are utilized in most cases today.

I’m still amazed at how those tiny balls can unfurl into large leaves. those leaves can unfurl. It can be tempting to use more leaves because they look like they won’t amount to much. For that reason, it’s better to measure your tea using a gram scale rather than a teaspoon.

The center of rolled oolongs in China is Anxi in the Fujian Province. Teas from this region among some of the most aromatic. Tie Guan Yin (or Iron Goddess of Mercy) is probably the most prevalent kind but other teas that are worth checking out include Mao Xie, Huang Jin Gui, and Jin Xuan.

Taiwan’s oolongs are descended from Fujian but teamakers there have since developed their own style. Teas from this region are usually named either by the variety that is used to produce them or the mountain on which they are grown. Those grown at higher elevation are often considered to be the highest quality. Da Yu Ling, Ali Shan, Dong Ding and Sun Moon Lake are all very well known regions within Taiwan. Ruby #18,Tsui Yu, Shan Lin Xi, and Jin Xuan are some of my favorite varieties.

Strip style oolongs are somewhat less common in the western market but they are equally awesome. These teas are also rolled but using a different method, resulting in a leaf that is long and skinny. They can be further divided into the two distinct types.

The Wuyi region in Fujian, China is known for their highly oxidized and roasted oolongs. Tea in this area is grown at high elevation, on misty cliff sides. Mountain Wuyi is actually a UNESCO World Heritage Site for both biodiversity and culture.

You might see teas from this region referred to as rock tea, cliff tea or yancha. They have a natural minerality in the taste because of the soil where the tea is grown. Wuyi yancha is most often named after the variety of the bush, some of which are very famous. Names to look out for are Da Hong Pao, Rou Gui, Shui Xian, and Tie Luo Han.

I’ve been keeping a running list of Wuyi oolong varieties in Google Drive that you might find useful:

Strip style oolongs hailing from the Guangdong Province of China are collectively known as Dan Cong, or Phoenix oolongs. There’s quite a bit of debate in the tea world as to what this name really means. Some interpret it to mean the tea was harvested from a single tree. Others believe that it is because the varieties used tend to have a single trunk. Still, others say that it means the tea was produced exclusively from clones of a single mother tree.

Phoenix oolongs are the doppelgangers of tea. They are classified by aromas ranging from different fruits, flowers, and other botanicals. The tea plants in the region benefit from high elevation and a consistently humid environment throughout the year. Oxidation levels can vary a bit depending on the producer but charcoal roasting is an essential step.

Mi Lan Xiang, or Honey Orchid Fragrance, is probably the most common variety. My all time favorite woudl have to be Huang Zhi Xiang. It was one of the first teas that I truly fell in love with.

I’ve also been keeping a list of Phoenix oolong varieties in Google Drive that you might find useful:

Sometimes you might see 1st Flush (and even 2nd Flush) Darjeeling referred to as oolong because it usually isn’t fully oxidized. For my purposes, I won’t include it here because I think it really falls into its own category.

The wonderful thing about the world of tea is that there are lots of gray areas. New teas are also constantly being developed, so we might see even more faces of oolong in the future. I’ll be sure to add to this post if anything not already covered pops up on my radar.

Do you have a favorite oolong? Let me know about it in the comments!