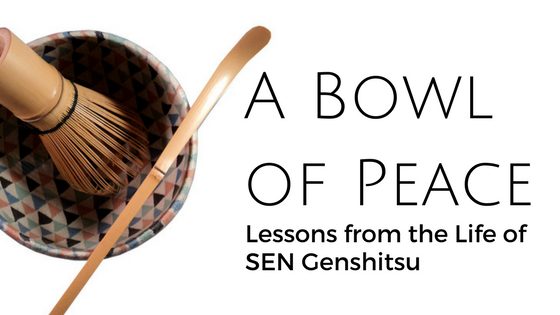 The world seems a bit more chaotic than usual as of late. This blog is not a political platform and I would never want it to be (please note that political comments on this post will be deleted for that reason) but a story I heard some time ago came to mind and I thought this was a good time to share it.

Tea has long been celebrated as a connector of people and a facilitator of conversation. The Japanese tea ceremony,  or chado, is a particularly good example of that. I’ve never formally studied it but have read every book I can find on the fascinating subject. We often hear legends of samurai meeting peacefully because their swords could not fit through the low entrance designed by Sen No Rikyu. I heard a more modern story of peace through tea on Tea Life Audio (though I cannot recall the episode) and the message really hit home. I just had to find out more about it.

First, a bit of background. There are many schools of Japanese tea ceremony. Urasenke is the largest of these and is currently headed by the sixteenth direct descendent of Rikyu himself. The head of the school is referred to as the iemoto. SEN Genshitsu was the 15th iemoto for thirty-eight years before passing the position to his oldest son, SEN Soshitsu XVI.

As a descendent of Rikyu, SEN Genshitsu studied the art of chado as a university student. At the age of 20, he drafted into the Japanese navy air service during WWII. He was later assigned to one of the special attack units know as the kamikaze. While serving he prepared bowls of tea for friends that he knew would most likely not be returning, just as his ancestor Sen No Rikyu prepared bowls for the samurai before battle. He was eventually transferred, allowing him to escape the fate that many of his fellow soldiers could not.

This experience made him determined to help the world understand that a bowl of tea can be a tool to prevent war. In 1951 he traveled to the United States for the first time. His mission to spread goodwill was the first of many trips he would take around the world. SEN Genshitsu went on to become a UNESCO Goodwill Ambassador and continues to travel the world sharing his message of peace. In 2011 he performed a tea offering ceremony at Pearl Harbor on the U.S.S. Arizona.

The world we live in is far from a peaceful one and at times I find myself feeling a bit hopeless. But as the English author Arthur Wing Pinero famously said, “”While there is tea, there is hope.”. SEN Genshitu’s message is one that all of us can take to heart. I’ll leave you with this quote from his book, Tea Life, Tea Mind:

“I have toured the world with the goal, ‘Peace through sharing a bowl of tea.’. Taking a bowl of green tea in your hands and drinking it, you feel one with nature and there is peace. This peace can be spread by offering a bowl of tea to another. I hope you will drink and share this peace with me.

The following is an affiliate link. I may receive a small commission for purchases made through it. All proceeds are used to improve the blog. My next goal is a better camera. Thank you for your support!