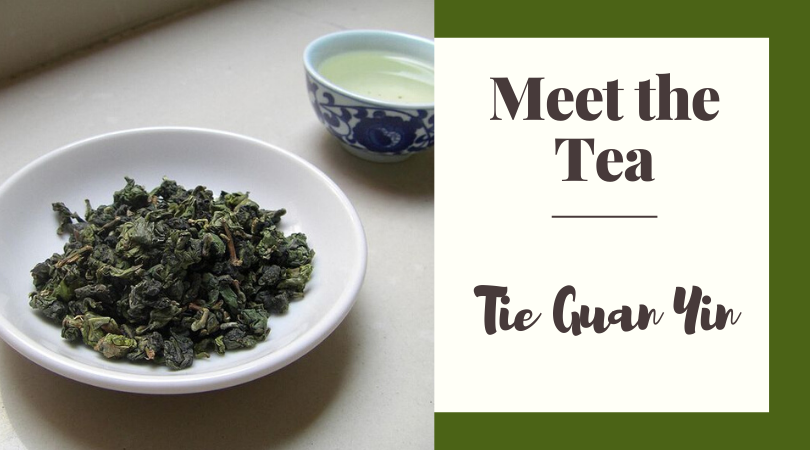 Tie Guan Yin goes by various spellings but it is probably the best known Chinese oolong tea. It is commonly referred to as Iron Goddess of Mercy and there are many legends about how this tea got its name. Traditionally it was made as a strip style tea with heavier roasting but that changed after the 1990s due to the influence of Taiwanese manufacturing techniques.

The dark green, semi-oxidized leaves are now rolled into tight balls. They will expand quite a bit after steeping and once unfurled, the leaves will have a broken appearance. Making this tea is a complex, multistep process that takes a high degree of skill. Hailing from Fujian Province, it is known for its strong floral aroma and taste that is reminiscent of orchids. Notes of peach and other stone fruits are also common.

Although it can be one of the most expensive teas, quality varies widely in the marketplace. There are many varieties and they are determined by both the roasting level and harvest time. Lightly roasted Tie Guan Yin is “green” tasting whereas a darker roasted version will develop a more nutty quality. New spring harvests are usually the highest in quality. Aged Tie Guan Yin has become popular in recent years. The oldest that I’ve tasted so far was 20 years old.

This tea lends itself well to traditional gongfu style brewing but it can also be brewed easily in a western-style teapot. It can stand up well to heat pretty well so your water temperature will usually be between 195 and 212 degrees. I prefer to do 30-second steepings using a gaiwan. If using a teapot you’ll want to let the tea brew for 3 to 5 minutes.

What is your favorite Tie Guan Yin oolong?