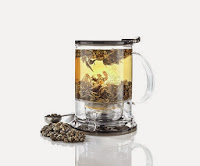 In a perfect world we would have the time to sit and gongfu the heck out of every single tea we drink. Most days, at least for me, that is sadly not the case. I’m always on the look out for tools to make it easier to enjoy tea and gravity steepers like this one are a great option. Teavana’s Perfect Tea Maker was included in the goodie bag when I attended the preview event for the new Teavana Fine Teas +Tea Bar in NYC. I have a similar contraption at work but this one was definitely much nicer (and not just because it’s new and shiny).

It fit perfectly on my large mug from Anthropology and I really like that it can be used with virtually any teacup you might have. The capacity is 16oz so you should have a large mug on hand or share the second cup with a friend. Although it is made out of BPA free plastic, it did not add any weird tastes or odors to my tea. The one thing that I would change is the lid. It isn’t really removable but it would be much easier to clean if it was. It’s easy to accidentally release the valve on these so I suggest keeping it on the included coaster until you are ready to release the steeped tea.