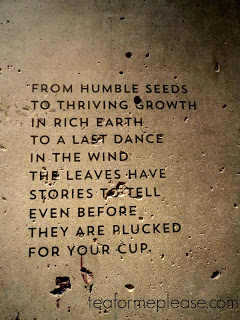 Teavana has just recently opened a brand new concept store on Madison and 85th street in New York City. There’s been a lot of buzz about it online so I was really excited to have the opportunity to attend the preview event this past Wednesday. I’ve also seen a lot of skepticism but I feel that the company has been moving in the right direction since being acquired by Starbucks. The moment that I stepped through the doors I knew that this was going to be a very different experience. The space was large, modern and inviting. There were lots of little details that you may not see upon first glance, like the tubes of tea in the ceiling.

I came right from work so I immediately gravitated to the food selection. The offerings were definitely reminiscent of Starbucks but I thought that it was still different enough to stand out on its own. The menu seemed seasonally inspired and there was everything from little pastry bites to large portioned salads. A lot of articles online scoffed at the menu but I felt that the prices were right on par with the neighborhood and the quality.

I had a roasted butternut squash strata that were absolutely delicious. Paired with a freshly brewed cup of Dragonwell, I was a very happy camper. I was able to speak with several partners who helped develop the menu and it was obvious everyone was incredibly proud of their creations. They did a fabulous job!

There were several signature drinks being served and I enjoyed all of them, even the ones that I was hesitant about trying. While purists might roll their eyes at the idea of them, these drinks will be an important gateway to getting people interested in tea. The coco caramel sea salt latte was my favorite. This location won’t be serving alcohol but they treated us to a tea cocktail that I will definitely need to try making at home. They made it by adding Prosecco to one of their peach iced teas.

One thing I was very impressed with was their use of the Bkon brewing system. It uses reverse atmospheric pressure to extract a perfect brew in seconds. Charles Cain, Vice President of Concept Development, demonstrated it for us using a monkey picked oolong and it was amazing to watch the leaves unfurl. The taste was not lacking in the least and it tasted exactly the same as if it were brewed traditionally in a teapot.

Fellow tea bloggers Jason Walker and Jo J were also in attendance and it was great to catch up with them and talk shop for a bit. While there’s a lot to be said for a plain and simple tea, I have a feeling that Teavana will fit right in with the “grab and go” culture of New York. My goodie bag from the event was full of all kinds of good stuff so expect some reviews coming soon.