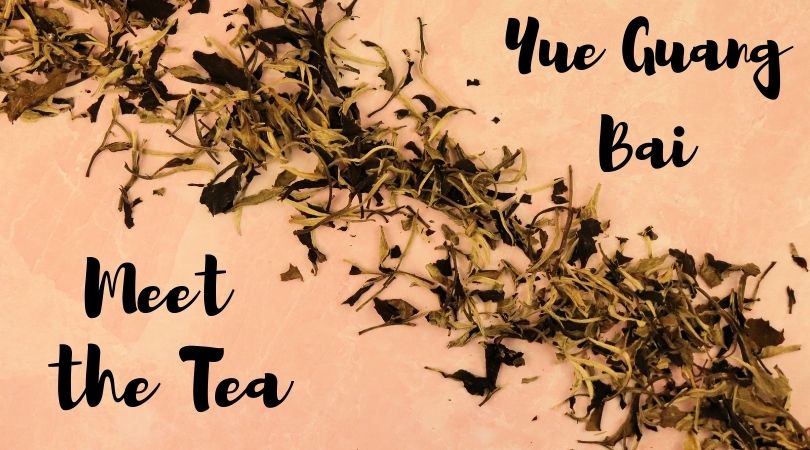 This week I felt inspired to dedicate a new installment of Meet the Tea to one of my favorite white teas, Yue Guang Bai (aka Moonlight White). It is known for both the striking appearance of the leaves and the fuller-bodied taste.

There are a few different stories about how this tea got its name. Some versions say that the tea is picked at night or that the leaves are withered in the moonlight. Others say that the silvery sides of the leaves represent the moon while the dark represents the dark night sky.

I love this tea so much that I chose it for the favors at my wedding! It is a fairly new variety, so you are unlikely to find examples from before the early 2000s. Some theories suggest it was invented to increase income during the puerh bubble that occurred around that time.

Moonlight White is usually made using the same Da Ye Assamica cultivars that are used to make puerh. I have occasionally seen vendors offering ones made from Camellia taliensis, but they are not very common. It is unlikely for the leaves actually to be harvested by moonlight, so don’t put too much emphasis on that aspect.

After harvesting, Yue Guang Bai leaves are withered either indoors or outside at night. This part of the process usually takes less time than Fujian white tea due to Yunnan’s hotter climate. The amount of time is affected by the weather and can vary quite a bit between producers. Once withering is completed, the leaves are dried with warm air.

Is It White Tea or Puerh?

I often see a lot of confusion about how to categorize Yue Guang Bai. A big part of that is that both of these teas come from the same place and can be made using the same material. It has also become popular to press Moonlight White into cakes, giving it a similar appearance to puerh. It is my opinion that it is a white tea because there is no fixation step during processing. More than a few companies incorrectly label it as white puerh, perhaps to appeal to a wider customer base.

Moonlight White is made in the Yunnan Province of China. The tea that I photographed for this post came from Jinggu. This area is generally considered the best producer of this type of tea. With its growing popularity, I have seen this style of tea being made in other parts of China and nearby countries, like Thailand.

I often recommend this tea to those who have trouble tasting more subtle white teas like a silver needle. Yue Guang Bai has a lot of the softness you expect but with a bit more oomph. The taste is soft and sweet with floral and fruity notes along with meadow hay and a pleasant maltiness. The downy hairs from the leaves contribute to a thick, almost fuzzy mouthfeel. There is usually very little bitterness but over brewing can cause some astringency. Higher quality examples will give a pleasant lingering hui gan. Moonlight White teas can age well over time if stored properly. The softness will slowly transition into deeper, darker flavors.

Moonlight White is fairly easy-going, so it does well with western and gongfu preparation methods. Many vendors recommend heating your water to about 200°F, but I prefer fully boiling water. I will usually use 6-8g of leaf in a 150ml gaiwan for gongfu style brewing. Rinsing is not necessary or recommended. Western-style brewing calls for about 3g of leaf for every 8oz of water. Infusion times are typically 3-5 minutes but feel free to experiment and adjust to your personal taste.

Once the Yue Guang Bai leaves have been steeped out, you can boil them on a stove to squeeze out the last bits of flavor. I also really enjoy drinking this tea grandpa style. One batch of leaves will last for hours, so it has become a favorite when working on blog posts or other writing projects.

Have you ever tried Yue Guang Bai (Moonlight White)? What is your favorite way to brew it? Let me know in the comments below!