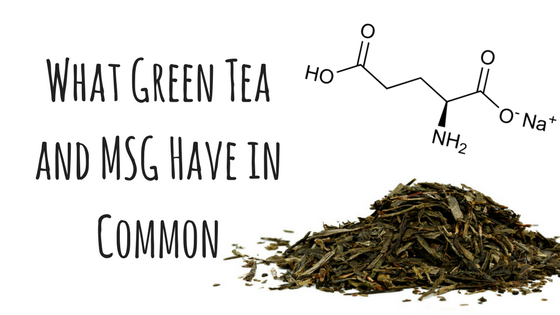 In elementary school science class we all learned about the four basic tastes that our taste buds can detect: sour, bitter, salty and sweet. There is also a fifth taste called umami. It’s a word borrowed from the Japanese language that describes a savory or meaty taste. It can be a be a bit hard to describe but seaweed, mushrooms, and aged cheeses are all examples of foods with umami.

MSG, aka monosodium glutamate, is an amino acid that is naturally found in our bodies as well as in food. MSG is commonly used as an additive to enhance the savory effect of umami in food. It’s hotly debated whether or not MSG is bad for us. I won’t get into all of that because this is a tea blog. Feel free to Google “Chinese restaurant syndrome” if you feel like being buried in fanatical internet commentary.

So, what does all of this have to do with tea? Green tea happens to be rich in glutamate. Theanine, another amino acid found in tea, is also very similar in structure to MSG. Theanine is believed to contribute to the sweetness of a tea. Catechin antioxidants are responsible for bitter tastes while caffeine causes us to experience astringency. Glutamate gives us the savory flavor that can best be described as umami. Other categories of tea may contain some the levels won’t be as high due to the chemical reactions caused by oxidation and processing.

Japanese green teas, in particular, are higher in glutamate because of the way they are grown and processed. The first spring flush (ichibancha) is highly prized for this reason. Gyokyro and matcha also have more umami because the leaves are shaded for a time before harvesting. The longer the tea is shaded the sweeter the taste will be and the more umami the tea will have.

Chinese green teas can also have umami but it usually isn’t as pronounced. If you’re seeking umami in a tea outside of Japan, you’ll want to look for higher elevation regions where the climate naturally shades tea plants with clouds and mist. Roasted teas like hojicha have much lower levels of glutamate.

The data in the chart below is a bit old but it’s still pretty interesting to see different types of tea compared. Although there aren’t really studies to back it up, I personally believe that the method of “kill green” used in Japan as well as the terroir and plant varieties used has an effect on how much umami a tea will have. The same tea can be produced in an identical way elsewhere but it will not have the intense umami that Japanese teas possess.

Do you have a favorite tea that has umami? Let me know about it in the comments!