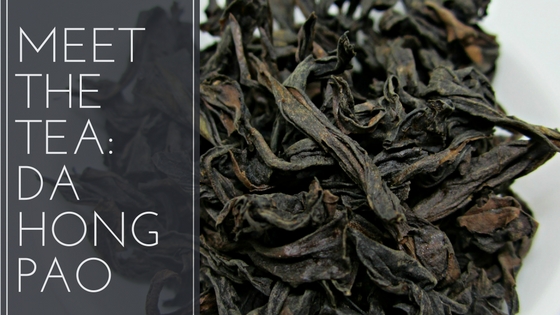 Da Hong Pao, aka Big Red Robe, is a type of oolong produced only in the Wuyi Mountains. Teas from this region are often called yancha, or rock tea, due to the rocky soil on the cliffs where the tea is grown. According to legend, the mother of a Ming Dynasty emperor was cured of an illness after drinking this tea. To show how special these tea trees were, he had the bushes that this incredible tea was made from draped with red cloth. Yet another version tells of a scholar who passed his exams thanks to this tea. He draped the bushes with the scarlet robes that he was awarded.

Even more incredible than these legends, six of the original mother trees are still believed to be alive today. They are estimated to be about 300 years old but no one really knows for sure. The Chinese government now protects these plants and no harvest has taken place since 2005. Although, I came across a blog post from Essence of Tea that indicates the government may still be doing non-commercial harvesting for research purposes.

Cuttings were taken from these original trees, creating genetically identical clones. Teas made from these clones are referred to as Qi Dan and they can fetch a hefty price tag. That being said, the vast majority of the tea sold as Da Hong Pao on the market are actually blends of several Wuyi oolong varieties. For this reason, it can be a bit hard for consumers to determine authentic what is an authentic tea because many vendors claim to have the real deal.

Da Hong Pao is made in the typical style of Wuyi oolongs, higher oxidation with extensive charcoal roasting. If you didn’t know any better you might think that it was a black tea. The taste is roasted and earthy with notes of tobacco. A strong mineral taste, also known as yan yun, is a hallmark of this tea along with an underlying floral quality. The roasting process can add a bit of char so many tea drinkers prefer to the let the tea settle for at least six months.

Fully boiling water is the rule of thumb when brewing Da Hong Pao. Western infusion times will range between 3 and 5 minutes. I recommend going a bit heavier on your leaf ratio though, at least two teaspoons for every 8oz of water. Although it can certainly be made in a western fashion Da Hong Pao really shines when prepared in a gaiwan or other gongfu sized vessel. I’ll usually pack at least 8g into my gaiwan. Infusion times will usually fall between 15 and 30 seconds, gradually lengthening the time as you go. Clay pots can help reduce the roast a bit if the tea is too intense for you.

These are some of the Da Hong Pao that I’ve reviewed here on the blog:

It’s currently sold out but I also highly recommend the Da Hong Pao from my friends at Zhen Tea.

Do you have a favorite Da Hong Pao? Tell me all about it in the comments!