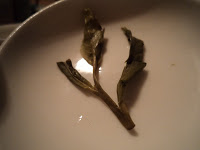 I haven’t done a blind tasting in a long time and I thought now would be a perfect chance to do that since I happened to have two Dragonwells from +JING Tea. Both teas are organic but one of them is supreme grade. I’ll be reviewing the teas individually after this and will be sure to post the links here once they are published. Before you get to the bottom of the post, see if you can guess which one is which. No cheating!

I prepared both teas in porcelain gaiwans using the same parameters, 170 degree water and 30 second infusions.

Visually the samples were very similar. The leaves in Sample B were just slightly larger and there was a bit more leaf fuzz in sample A.

The taste of these two teas was comparable at first. As I sipped (three infusions of each, can you say tealogged?), Sample A seemed to have a thicker mouthfeel and came across as nuttier with a lingering sweetness. Sample B was also sweet but had a tiny bit of a more vegetal taste and a thinner mouthfeel. A close examination of the leaves revealed that both contained an pretty equal amount of bud tips. Sample B appeared a bit larger and rougher around the edges.
And the verdict is……
Sample A is the premium! Did you guest correctly? Let me know your thoughts in the comments.