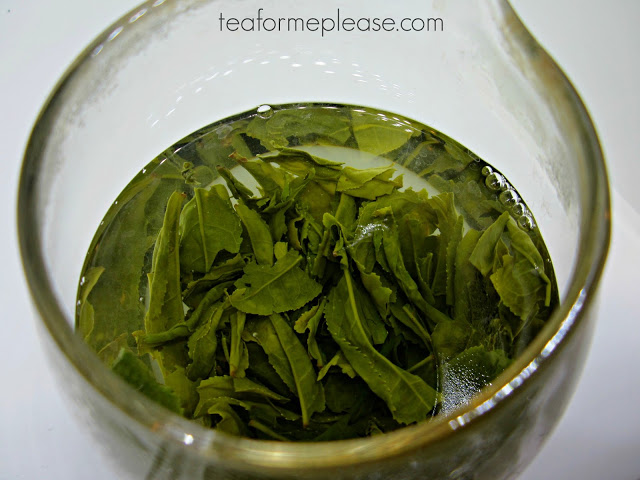 Gua Pian is an unusual kind of green tea because it is made solely using mature leaves. Buds are usually the more prized type of leaf but the tea producers in Anhui purposely make the tea this way. I’ve realized that green tea (with the possible exception of yellow tea) is probably the one category that I drink and write about the least. I hope you guys don’t get the idea that I don’t enjoy green tea because nothing could be farther than the truth.

The wonderful folks from +ZhenTea gave me a bit of this tea when we met up at World Tea Expo last year. Funnily enough, we also just recently met up for tea in NYC. Tea people are some of the nicest people I know. Zhen and Phil are a pretty great example of that. For my Canadian readers, you’ll want to keep tabs on them if you’re located near Ottowa.

The taste of this tea was savory and herbaceous without being bitter. There was a very subtle hint of roast that added a nutty quality to the first few steeps. Full bodied flavor combined with a thick mouth feel gave an almost broth-like affect. Following their brewing directions (3g in 150ml of water) yielded six very tasty infusions. I like brewing my green tea loose in a glass sharing pitcher but a more western style brewing method would be fine as long you use a fairly small vessel.

Gua Pian is a fantastic choice for people who think they don’t like green tea (yes, such creatures do exist). I definitely suggest giving this one a try if you haven’t already. It’s certainly better than some of the pricier Gua Pian’s that I have tried in the past.