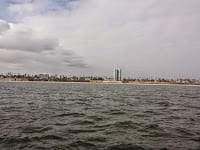 Many of my housemates had shipped out by Saturday so I took advantage of taking a nap in a nice big bed. Tea partying all night takes a lot out of you! The expo being over, Natasha N and I decided to have a bit of a tourist day. We started things off by walking to the Long Beach Museum of Art. Admission was free since they were having an art auction. None of the pieces were within our price range but it was enjoyable to walk through nonetheless.

We grabbed a matinee show of Avengers and took a walk by the waterfront. We initially planned to go to the aquarium but it was a bit pricier than I was expecting. As luck would have it I spotted a whale watching boat ride for much less. We didn’t see any whales but we did catch some sea lions hanging out on a buoy and take in some beautiful views.

We grabbed dinner at a cute local place and came back to the house just in time for even more tea imbibing. I slept like a baby that night. It had been a very long week! The end of expo is always a bit sad. Natasha N likened it to con depression. We all said our goodbyes and I headed to yet another bus station so that I could make my way to airport.
Unfortunately I received a notification from Jet Blue that my flight had been canceled. After a long and frustrating phone call, I secured the last seat on the only other flight going to New York. I was supposed to be landing at 10:45pm but I would now be arriving at 6:00am the next day. Jet Blue gave me food vouchers for lunch and dinner but they could only be used past the security check point. The bulk of my day was spent lounging around Long Beach Airport. Thank god for free soda refills! I do have to say that they had some of the best airport food that I’ve ever had.

The airport has an outdoor seating area so I took in the sunset before grabbing a panini and Manhattan cocktail. My redeye was a sleepless flight and despite my exhaustion, I had to go to work because there was no one available to cover my shift. It was all worth it in the end though.

This was a fantastic week spent renewing connections and beginning new ones. I’ve learned so much about tea and even more myself and where I want to go in this industry. Before heading to Long Beach, I promised myself that I wouldn’t go next year because I wanted to travel to Taiwan. After this week I don’t think I can miss out on all of the fun that will take place in Las Vegas next year.