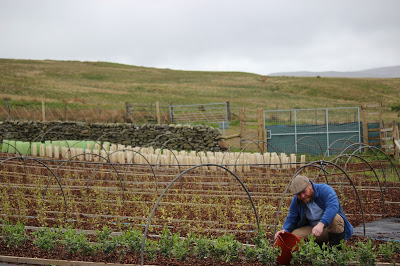 I first heard about +The Wee Tea Company through fellow blogger +Geoffrey Norman. The fact that they were growing tea in Scotland certainly caught my attention. I’ve been keeping tabs ever since, in part because they give me hope about being the first tea farmer in New Jersey. Sir Geoff kindly shared their smoked white tea with a group of us after the Tea Blogger Roundtable at World Tea Expo this year. The Wee Tea Company recently launched their Dalreoch Estate brand in the U.S. and I had the opportunity to interview Jamie Russel for my very first World Tea News article. I totally meant to share this experience with you guys sooner but life gets in the way of writing sometimes.

I met Jamie at The Pembroke Room of The Lowell Hotel on a rainy evening after work. Their afternoon tea service is legendary and I had never visited before so I was really excited to check things out. From the moment I walked in the front doors, I could tell that I was somewhere special. I wouldn’t call it antique or vintage but the whole place had an opulent old fashioned feel to it. Jamie was affable and wonderfully passionate about his tea. I loved hearing about the historical documentation he found about growing tea in the U.K. Who would have guessed that Scotland would have a similar micro-climate to Darjeeling?

We shared a tower of delicious sweets and savories as well as several pots of their smoked white tea. I thought it was very interesting that the tea was served with lime slices. Jamie suggested rubbing the rim of the teacup with them. That little touch of citrus really accentuated the smokiness. This tea was quite unlike anything that I had before. The taste was multi-layered and nuanced, allowing the peach-like fruity notes to shine through.

I think that Dalreoch Estate’s innovative agricultural techniques could become very important as climate change affects traditional growing regions. The tea industry may need to evolve in the future and small operations like The Wee Tea Company will be the forerunners.

Click the link below to read my story on World Tea News!

Update: Several years after this post was written, it came to light that the tea this company sold was actually a fake! You can read more about that in this article from Fresh Cup.