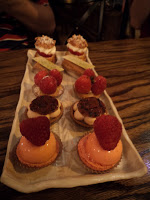 I was recently invited to a tweetup at Bosie Tea Parlor. It was named after a lover of Oscar Wilde and is nestled in the West Village of New York City. This hidden gem combines both the French and British high tea service into a truly decadent culinary, tea themed adventure. The owner, Nicky Dawda, was very knowledgeable and he explained how they source their teas and how their pastries are made. They are one of the few places I’ve been to who have a tea master on staff. Kiley Holliday is the youngest female Tea Master in the U.S. Their pastry chef, Damien Herrgott, was recently named one of the top ten pastry chefs in Amercan by the Dessert Professional magazine so I knew that I was in for a real treat.

Our welcome cocktail was a delicious Apple Berry Bliss Tea-mosa. It was made with prosecco, strawberry puree and an apple and hibiscus tea. This was the first tea cocktail that I’ve ever had but it is definitely something I want to explore more.

The first course consisted of tea sandwiches. They were simple yet tasty. The three flavors we were offered were egg salad, curried chicken and cucumber with cream cheese and dill.

Next came a course of mini quiches. The Lorraine were my favorite since they had bacon 🙂

An assortment of decadent desserts followed. My favorite was the Isaphan which was made from rose macaroon, rose butter-cream and lychee topped with the juiciest raspberry I’ve ever seen.

As if all of that wasn’t enough, we were offered a plate of amazing macaroons along with cups of plum oolong and chocolate mint rooibos.

Although the others in attendance were not tea bloggers there was still plenty of talk about my favorite subject. I definitely have to thank Charu from Butterfly Diary for inviting me and Bosie Tea Parlor for being such gracious hosts. I cannot wait to bring my boyfriend here for brunch as Nicky’s description of their french toast made my mouth water.

You can find out more about them here.