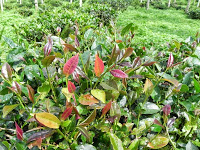 Today’s guest post was contributed by Andy Kincart of Eco-Cha Tea. We often hear about how tea was brought to Taiwan from other countries but I have never heard of an indigenous variety even existing until now.

On my first visit to the Nantou Global Tea Expo this year, I bumped into the niece of one of my oldest tea farmer friends from Lu Gu. She was there helping a friend as a vendor of his tea from the Sun Moon Lake Area. What first stood out to me about their booth, among hundreds of vendors, was the backdrop photos of reddish-purple leaf buds of tea. I instantly thought, “Iʼve never seen that color on the new growth of tea plants before”. And so began my latest lesson in Taiwan tea cultivation. This plant, which this farmer has given the name “Purple Leaf-Bud Tea” is the indigenous tea plant.

I sat down at their tea table to sample three types of black tea they were serving simultaneously (in order to experience the differing qualities of each one). The first one I tasted was introduced as “Taiwan Mountain Tea” and was defined as the indigenous tea plant that is naturally occurring on the island of Taiwan. The second was a different harvest from the same plant – after the harvested leaves had been bitten by an insect that is responsible for making the renowned Oriental Beauty and Concubine Oolongs in Taiwan. This harvest produced less than ten pounds of tea from the entire season! This is the reality of chemical-free tea cultivation, but thatʼs a wholly separate topic. The third tea offered was Taiwan Tea #18 – also called Red Jade. All three were distinctly different and of the highest quality black tea Iʼve tasted in Taiwan. I was immediately impressed. I soon found out that the bug bitten harvest won first prize at the Yu Chi Farmersʼ Association for the Taiwan Mountain Tea competition.

I had tasted “wild tea” before, (tea made from leaves harvested from the indigenous tea plant) but only as a very green type of oolong, not as a black tea. The tea I had known about and tasted previously comes from the southernmost mountains of Taiwan in Kaohsiung County. This tea grown in Central Taiwan and processed as a black tea was a completely different experience. So as we sat and drank tea and talked, a gap in my knowledge of tea production in Central Taiwan was filled.

Most significantly, I learned that there are cultivated tea plants in the Sun Moon Lake area that are over 100 years old! Prior to this, I had heard mention of tea plants in Northern Taiwan with such history, but of a very scarce amount. This prompted me to call on a friend who works at the Yu Chi Tea Research Extension Station (and who I buy our Red Jade #18 tea from) to learn more. He told me about the history of the discovery and cultivation of this indigenous tea that dates back to the Portuguese exploration and partial occupation of this island in the 1600ʼs. The first documented discovery of wild tea trees by the Portuguese was in the region that is now Nantou County. The area was then called “Shui Sha Lian” and the tea grown here continued to be given this name until very recently.

The history of its cultivation from this time of discovery is not well documented, but the fact is that there were
tea gardens of this indigenous plant being cultivated in this area upon the arrival of the Japanese around 1900. This is most likely the reason that the Japanese established their tea research and development HQ at Sun Moon Lake.

Japan proceeded to import the tea plant from Assam, India and cultivated Assam tea along with the indigenous plant in the development of their black tea export industry which flourished in first half of the 20th century. Not until just about 10 years ago was Taiwan Mountain Tea – the indigenous plant – officially recognized as the unique natural and historical treasure that it is. The recognition occurred in the wake of the 9/21 earthquake in 1999 when government attention was brought to the redevelopment of this area at the epicenter.

The earthquake also happened only months after the hybrid tea known as Red Jade was registered at the Tea Research Extension Station as Taiwan Tea #18. Actually, this hybrid of Assam tea with the indigenous plant is known to have been cultivated since at least as early as 1985. Assam tea had been grown here since the early 1900ʼs so it makes agricultural sense. But it wasnʼt only the cultivation of the tea plants, it was an innovation of their processing along with modern knowledge of soil conditions and natural fertilization. This is what has been bringing attention to Sun Moon Lake Black Tea in the last decade.

The government funded Tea Research Extension Station (TRES) was inherited from the Japanese tea research center and has continued experimental tea cultivation in order to support and guide the local industry. In 1999, TRES officially recognized Red Jade #18 as an ideal tea strain for black tea cultivation. Consequently, attention was finally given to the historical tea gardens of indigenous tea plants that predate Japanese development.

There are two main reasons that these two tea types were recognized by TRES as ideal for black tea production. First, both the original and the hybrid plants contain the DNA of the wild tea tree – providing immunity to natural ʻpestsʼ and assimilation with the environment. Both of these tea types can be cultivated without the use of any chemicals whatsoever. Second, they both produce teas with their own distinct qualities of extraordinary flavor and fragrance. The combination of scientifically researched natural farming methods with modern methods of processing tea leaves have given us two “new” specialty teas. The processing methods that have been developed for oolong production in Taiwan over recent decades have innovated black tea processing methods to bring us black tea that is rapidly gaining recognition around the world.