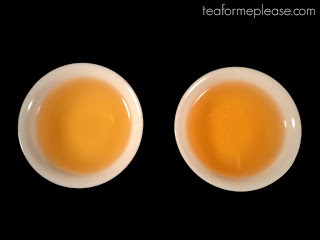 I have a veritable treasure trove of puerh in my possession thanks to +JalamTeas. When I realized that had two Nanuo sheng cakes I couldn’t resist doing a side by side comparison. The teas in question are Nan Nuo (Pa Sa) Unfermented Puerh and Nan Nuo Mountain (Zhu Ling Village) Sheng Puerh. While they are from the same mountain and the same year (2014), there are a few key differences. Tea A is from the Pa Sa area and was harvested in the spring. Tea B is from Zhu Ling village and was harvested in the summer. They were both produced by people of the Hani minority and they are both sheng (aka raw) puerh. I used 5g of each tea in 150ml porcelain gaiwans. I used a standard steep time of 30 seconds for each tea, rinsing them once.

And the verdict? The two teas were very similar. So much so that if I was a totally newbie, I’d probably think that they were one in the same. You can just barely tell the difference it the color of the liquor in my picture below but it was much more obvious to the naked eye. The taste was again similar but subtly different. Tea A had a brighter character with a thinner, more refreshing body. Tea B was slightly more astringent with a bolder taste and thicker mouth-feel. Both teas were vegetal and earthy with a lot of natural sweetness. In the later infusions I even started picking up a hint of peach.

I always love the detailed notes that are included on the postcards that accompany these teas. Interestingly, Tea B is suggested as better to drink now whereas Tea A is ready to drink now but will age very well. I’m reminded of my days working at a wine store. Customers would always want to know whether their wine could be aged and for how long. Just as with tea there are no hard nosed answers. Every tea and every tea drinker are different. The climate in my apartment in New Jersey is not the same as a house in Arizona or a duplex in Washington. General guidelines can be a good place to start though especially if you are just beginning your journey.

Experiments like this remind me of why I love puerh so much. It’s complex and hard to put your finger on in a really good way. Needless to say, at the end of it all I was full to the gills and considerably tea drunk. Have you done any interesting tastings lately? Let me know about it in the comments!