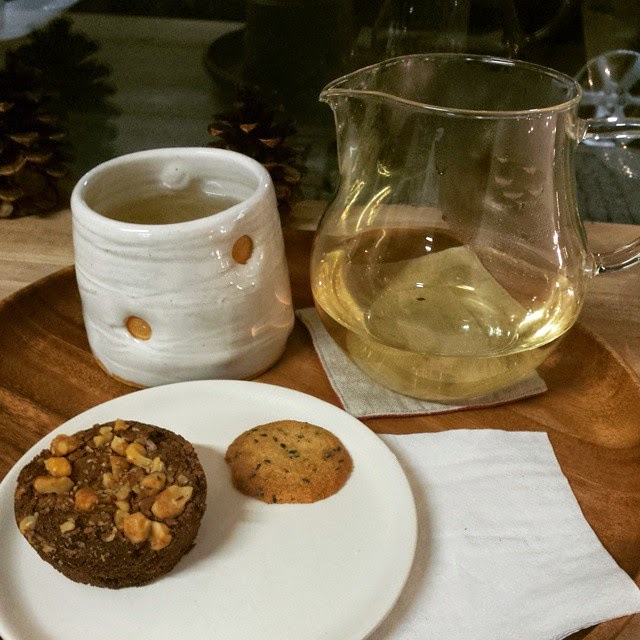 Just when I thought that I had run out of new tea places to visit, I found out about a pop up tea shop called +Tiny Pinecone Teahouse and Bakeshop. The location is just as adorable as their name. The seating area is small but inviting. One of the first things I noticed when walking in was a display of gaiwans and other teaware. My kind of place! The tea list was not very big but there was a wide range of options offered. My first choice of an oolong was temporarily unavailable so I opted for the Huo Shang Huang Ya, a  yellow tea, instead.

There were quite a few baked goods and they all looked delicious. In the end, the olive oil brownie called my name. The only seat open was at the small bar facing the window. This worked out just fine for me since I got to sit right next to a space heater. I’m one of those people who are always cold so that was appreciated. It’s always interesting to see what each tea places uses to make their tea. Tiny Pinecone used the funky Hario brewers that I affectionately refer to as fishbowl brewers. In truth, I really want one but can’t justify adding another brewing gadget to my collection.

The tea was served in a gorgeous mug accompanied by a large glass pitcher. It was so aromatic, I couldn’t help but stick my nose into the pitcher. The brownie was incredibly moist and it was devoured much too quickly. This place had a great ambiance and I felt a little sad knowing that this spot is only a pop up. The good news is that there is still time. They’ll be open until February 21st.

You can find out more about Tiny Pinecone here.