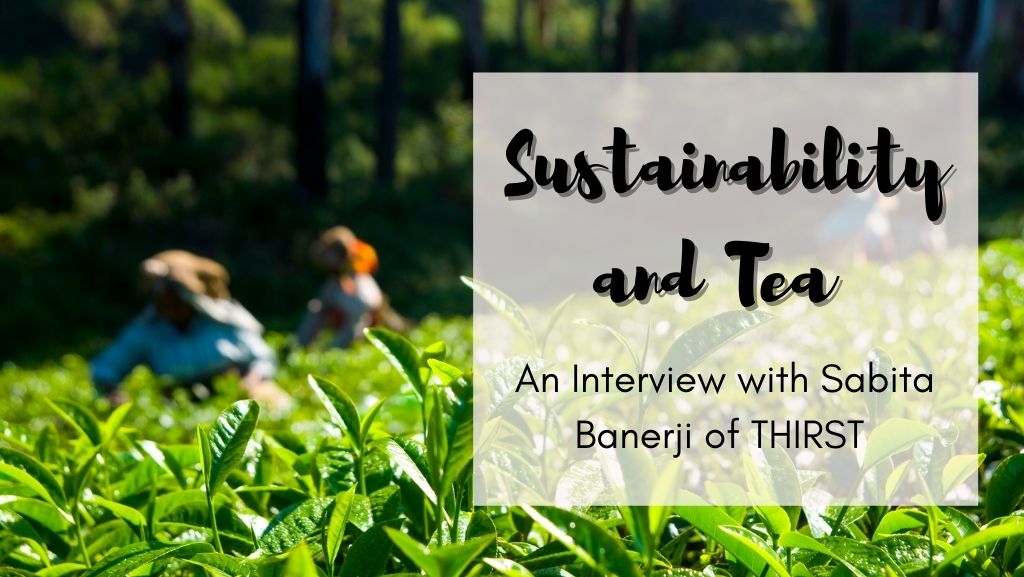 As a tea writer, I try to use my voice to promote sustainability and tea. Educating consumers is a huge part of that mission, but it can be hard for tea drinkers to know if their tea is ethically sourced. It can be hard to see past greenwashing and other misleading marketing tactics. I reached out to The International Roundtable for Sustainable Tea (THIRST) to see if they could answer some questions that often come up. Sabita Banerji, CEO and Founder of THIRST, kindly took the time to share her perspective and knowledge about these difficult issues.

Sabita is an economic justice advisor who was born and raised on tea plantations in Kerala and Assam, Sabita has nearly 20 years experience working in ethical trade and international development having held strategic posts at Oxfam and the Ethical Trading Initiative. She was previously a member of the Board of Directors of Just Change, UK – a voluntary community tea trading initiative.

Can you tell me a bit about THIRST and what your organization does?

THIRST is the International Roundtable for Sustainable Tea and it exists to improve the lives of the people who grow tea and work on tea plantations around the world.

I was born and raised on tea plantations (also called tea estates or tea gardens) in Kerala and Assam (in India) and my family moved to the UK when I was a child. I grew up seeing at first hand people living in tiny huts and working all day in the tea plantations in the hot sun or without proper raincoats in the monsoon, while my family and I lived in a comfortable house. That was just the way things were. We accepted it. But when I grew up I was drawn to working for non-profits tackling poverty – so maybe deep down I didn’t accept it completely.

When I went back to Kerala in 2015 I witnessed the uprising of thousands of women who worked in the plantation. They called themselves Pempilai Orumai – Unity of Women in the predominant local language, Tamil. They were demanding decent pay, housing, healthcare and safe working conditions. And they were protesting against the trade unions and politicians who they said weren’t protecting them like they should be.

It was a turning point in my life. At the time I was working for the Ethical Trading Initiative (ETI) – an organisation that brings companies, trade unions and non-profits together to defend workers’ rights around the world – and here I was in my birthplace with these brave, strong women saying ‘We pick the tea, and yet others get most of the money.’ I was in the right job, in the right place – it felt like a calling.

For various reasons ETI wasn’t able to support the women in the way that I’d hoped they could. I talked to lots of different organisations who were trying to help tea workers – like the Pempilai Orumai women – and small tea farmers. But although they were all doing great work, each one was focusing on a single aspect or area of the tea sector so nothing ever changed very much. I believe that the problems are caused by the way the whole sector works. So in 2018, I set up THIRST to bring together the knowledge and experience of these organisations, to fill in the gaps in their knowledge and to provide a platform for them to speak out together in defence of the women and men who make our favourite drink possible.

We put out a Monthly Update with news about human rights and environmental issues in tea growing areas, organise talks, publish briefings and manage a Knowledge Hub with reports about conditions for tea workers and farmers around the world. For example, when tea workers in Assam went on strike demanding better pay last year, THIRST convened a group of non-profits to tell UK-based companies why it was so important for them to support the workers’ demands.

But what makes any argument stronger is hard evidence. We are about to embark on a three year research programme to provide hard evidence of the issues that tea workers and farmers face, what is causing the issues and how to resolve them. It will look at the global tea trade and involve a wide range of organisations, companies and individuals. This way we can make sure that the system itself changes so that people growing tea have decent lives.

Why is it important for tea to be sustainable?

It’s important for every industry to be sustainable! But a sustainable tea industry would have a huge impact on the world. You will have seen the often quoted fact that tea is the most popular drink in the world after water… and that’s still true – even with the growing popularity of coffee and carbonated drinks. Tea employs millions of people around the world, and millions more – their families – are dependent on them.

Tea cultivation covers thousands of acres of land, often to the exclusion of all other vegetation, creating ‘green deserts’. It’s often grown using artificial fertilizers and pesticides. Tea factories mostly use wood to fuel the roasting process which destroys trees and creates polluting smoke. And the growing numbers of small tea growers mean more and more forests being chopped down to make room for them. So both from an environmental and social point of view, making tea sustainable can only be a good thing!

Are organic and fair trade certifications a viable solution to these issues?

Organic and fair trade certifications are a good start. They show that the tea producer is aware of the problems and trying to do something about it. They also show that others in the ‘value chain’ – the chain of people who produce, process, trade, package and sell the tea to you – are making an effort too. And that includes you when you choose organic or fair trade over other teas, even if they cost a bit more.

But they are not enough on their own to solve all the problems. Organic tea grown without using chemicals won’t solve the deforestation issue. And the way that tea plantations are set up mean that even workers on fair trade certified plantations are paid no more than on other plantations, and are still living in small, overcrowded houses often without access to good health care and clean water. They do get other benefits, but struggle to improve these basic needs.

Having said that, the more fair trade tea that is bought the better fair trade can serve workers and farmers. And the more organic tea that is grown the less chemicals are used – so please keep buying organic and fair trade! Some tea companies have gone further than organic and started using the ‘biodynamic’ method of cultivation, an holistic, ecological, and ethical approach to farming… rooted in the work of Rudolf Steiner. So look out for Demeter certification that tells you that the tea has been produced biodynamically.

Are there viable alternatives to the plantation-style systems that still exist?

Yes, there are. In India workers on tea plantations that have closed down because the owners have gone bust are starting cooperatives with help from tea companies and non-profits. Some, like Mineral Springs in Darjeeling are doing well – selling organic and fair trade certified tea alongside spices, vegetables and dairy products. Not only do they have more control over their lives than tea plantation workers, but their way of farming may also be better for the environment. Another example is the Fintea Growers Cooperative Union in Kenya which supports small farmer cooperatives and works with the UK’s Coop supermarket and Fairtrade Foundation.

What are some things that the average tea drinker can do to impact the tea industry?

Speak up! Let your favourite tea company or supermarket know that you want to be reassured that the workers and farmers who grow and process the tea live decent lives that meet internationally agreed standards of human rights. Tell them that you want tea to be grown in a way that doesn’t damage the environment or the health of workers and farmers. And tell them that if need be you are prepared to pay a little more (but that you expect them to take some of the hit too!). But, like I said, buying organic and fair trade also sends a message and helps to show tea companies what consumers really value.

How can consumers tell if their tea was produced sustainably?

That’s a tricky question. Because, to be honest, the whole tea industry (and global agricultural trade generally) operates in a way that’s not great for workers, farmers or the environment. It was designed to pay as little as possible at the production end, and to make as much profit as possible at the packing and retail end. Of course ‘single estate’, or co-operative tea that is organic and fair trade certified tea is likely to be going in the right direction – but the whole industry needs to change so that workers and farmers get a fairer share of the price of tea (and so that the price reflects the true, sustainable cost of producing it) and it starts to be grown and processed in a way that does not damage forests or pollute the air.

That’s what THIRST’s study is hoping to do – to show what needs to change, how and why. And then to support the tea industry to make the changes needed so that people like those brave Pempilai Orumai women have decent lives and hope for their future and the future of their children.

You can find out more about THIRST and our work to support decent lives for tea workers and farmers at https://thirst.international. You can also sign up for our Monthly Updates and news of our TEA Talks.

Thank you to Sabita for generously taking the time to provide such thorough answers. I hope that this post provides some insights to help us all make more educated decisions when it comes to purchasing tea. Do you have any other questions about sustainability and tea? I would love to hear from you in the comments below!