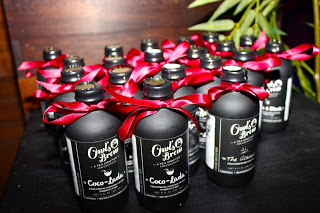 Earlier this year I attended the launch party for Owl’s Brew, a new line of tea cocktail mixers. Last week they had another celebration and I was so excited to get to sample their tasty creations again. This time the party took place at Riff Raff’s, a funky little spot in Manhattan’s Flatiron District. My boyfriend Jason tagged along but he was soon quite hooked and the innovative drinks that were served.

The menu offered a range of brew, bubbles and liquor. All of them were made using one of Owl’s Brews delicious flavors. On most days Jason and I are plain beer and whiskey drinkers so it was fun to step a bit outside of our comfort zone. Click on the picture to the left to see an enlarged version. Although the bar area was crowded, we were happy to find a spot on a comfy couch where we could catch up on each other’s day.


Jason and I studied the menu for a bit. He wasn’t sure how he would like some of the concoctions but eventually he settled on a Manhattan Owl. This was more in his comfort zone since it contained Pink & Black (their Darjeeling, hibiscus blend), whiskey and bitters. I went for a Dark Heart which also used Pink & Black, blended with cassis and Champagne.

Our next round was beer cocktails. I thought that these were particularly innovative. Jason ordered a Red Shandy which featured the Pink & Black blended with a pilsner. Being a dark beer kind of girl, I went with a Gingerbread Beer. It featured their Coco-Lada (black tea with chai spices and pineapple juice) mixed with ginger liqueur, spiced rum and stout. It tasted just like creamy gingerbread!

For our last round of drinks Jason decided to try the Dark Heart that I had before. I went with something different and ordered a Margaritea which featured The Classic (English breakfast black tea with lemon and lime juice) mixed with tequila and jalapenos. I of course forgot that I’m that big of a fan of margaritas in the first place but it’s always fun to experiment.

The photographer at the event snapped some great shots, including a few of Jason and I. Thank you to the Owl’s Brew gals for inviting us! We had a blast 🙂