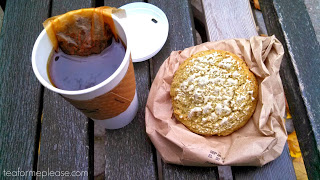 New York City seems to have had a boom in new tea places as well as coffee places that are now serving tea. One place I have been meaning to check out is Grounded, a coffee and tea house in the West Village. The shop was cute and eclectic with chalk board menus and mustachioed baristas. I was impressed with the size and depth of the tea menu. Spotted among some of the more typical offerings were rare treats like Darjeeling white tea and Lapsang Souchong. Although the line was long it moved quickly and without much fuss.
There weren’t any seats available and I wanted to make sure I wouldn’t be late for work so I grabbed a cup of Golden Yunnan to go. The green tea cookies in their bakery case also called my name. I hopped the subway and stopped in Tompkin’s Square Park to enjoy my cuppa. Much to my dismay I discovered that the “fill your own” teabag had been tucked into the sleeve so I did not see that my tea had been steeping all of that time. The tea wasn’t bitter but it just wasn’t as enjoyable as it would have been if I had been able to remove the leaves in time.
I’ll definitely be returning to this place in the future and hopefully next time I’ll be able to grab a seat. If not, I now know that I need to check under the sleeve!
You can find out more about Grounded here.
Speaking of tea places, have you followed Tea for Me Please on FourSquare yet? Save my Tea in NYC list and you’ll always be able to find a cup of tea 🙂