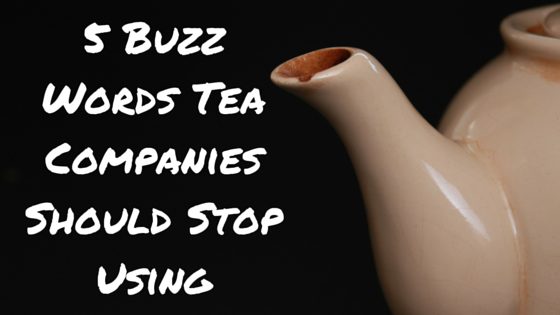 After drinking tea for so many years there are some buzz words used by tea companies that really get my goat. Time and time again they are used in a way that deceives or misleads the consumer. The simple truth of the matter is that all of these terms are devoid of any real meaning. In some cases the root cause is ignorance. I often see vendors who take their wholesaler’s word for it. There are others who are fully aware that their teas are not what they say they are yet they continue to market them as they see fit.

If a tea is being sold by an retailer it is therefore impossible for it to be rare. I most often see this word used in reference to white tea and puerh. There are more companies selling these two types of tea than I could possibly name. I don’t care if it’s the fanciest silver needle or “monkey picked” whatever, your tea is not rare so stop telling people that it is! Now I’m not saying that rare teas don’t exist in the world. They definitely do but they are not likely to be seen outside of the geographic areas where they are produced.

Definition: having the qualities of age or long existence
Puerh companies are most often guilty of using this buzz word. Verifying the actual age of the trees that a tea is produced from is next to impossible. Chances are that any given cake is made up of a blend of leaves from multiple locations. That doesn’t stop companies from claiming that their mass produced, plantation farmed tea was grown on trees that are thousands of years old. Yunnan locals have even been caught putting up fake signs declaring how old their trees supposedly are. Don’t fall for the hype guys!

Definition: a regimen of eating and drinking sparingly so as to reduce one’s weight
As a woman I find it really offensive when companies market to me about dieting, especially when those claims are unfounded. If tea really caused the amount of weight loss that is attributed to it, I would practically disappear because I drink so much of it. Tea is a healthy lifestyle choice and it can compliment an already balanced meal plan. It is not a magic cure that will suddenly cause the pounds to drop off.

Definition: to remove a poisonous or harmful substance
The legend of Shen Nong aside, tea will not in any way remove poison or other harmful substances. Tea does not and cannot cleanse your digestive system, organs or any other body parts. Tea does contain antioxidants which MAY help fight the oxidation that naturally occurs in our bodies. This does not make it a miracle health tonic. Tea will not make up for your hangover or any other poor life choices.

Definition: existing in nature and not made or caused by people, not having any extra substances or chemicals added
Natural is a seemingly innocuous word but its definition is often stretched to mean many things, especially when it comes to tea. If anything is added to the tea it is no longer natural as far as I am concerned. That is not necessarily a bad thing but it is difficult for the consumer to know exactly what it is that they are drinking. The required labeling of natural vs artificial flavoring is vague at best.
Are there any buzz words that you think should be on this list? I’d love to hear about it in the comments!