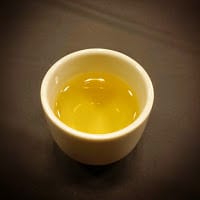 I fully intended to get to the expo center early so that I could attend Selena Ahmed’s talk, Promoting Sustainability and Climate Mitigation in the Global Tea System. First I missed my bus by mere seconds. I got on the next bus some 20 minutes later and about halfway to the convention center I realized that I had left my press pass at the house. I’m the kind of person that this sort of thing happens to frequently so I shouldn’t be surprised.

Direct Trade – Building Relationships with Tea Producers
+Elyse Petersen gave an enlightening talk about the importance of direct trade. The art of tea making is dying and we need to preserve it in order to ensure the sustainability of our industry. Commodity tea does not benefit the workers who produce it or the end consumer. Companies like +Tealet are pioneers in storytelling marketing and they are shaping where our industry goes in the future.

After Elyse’s talk it was time to get to work drinking tea and browsing the show floor. +Chris Giddings and +Geoffrey Norman both have a knack for finding cool stuff so pal’ing around with them led to some interesting discoveries. Columbian grown tea from Bitaco and Indonesian white teas from Chariteas were both highlights. +Jen Piccotti posted this great picture of all of us at +The Finest Brew, a booth where we would spend a large portion of the expo getting deliriously tea drunk. One of the teas that we were most intrigued by was a Tie Guan Yin that had been aged inside of a bitter gourd. Say what!?!

Before we knew it the time had come for the 3rd Annual Tea Blogger Roundtable. I was honored to be invited to be a panelist again this year. A kilt wearing +Gary Robson moderated while +Naomi Rosen, +Chris Giddings, +Jo J, +Geoffrey Norman, +Jen Piccotti, +Rachana Rachel Carter and I fielded questions. The topics ranged from social media to best practices. We also announced our plans to help tea bloggers organize smaller roundtables around the country. If you’d like to be a part of this initiative, sign up at: http://join.orderoftheleaf.net.

+Nicole Schwartz live tweeted everything so I’ll just embed it all here for you guys to browse through.

After the roundtable we gathered for a toast of Scottish grown white tea that +Geoffrey Norman generously shared with us. +Charissa Gascho, +Darlene Meyers-Perry, +Katrina Ávila Munichiello and +Ricardo Caicedo joined in on the fun as well. The US League of Tea Growers meeting was taking place next door so we slipped in to catch the tail end of that. Their insights have proven invaluable since last year. My surviving tea plants and hopeful seeds thank them.

I’ll be publishing another post later today detailing my night at the World Tea Awards.