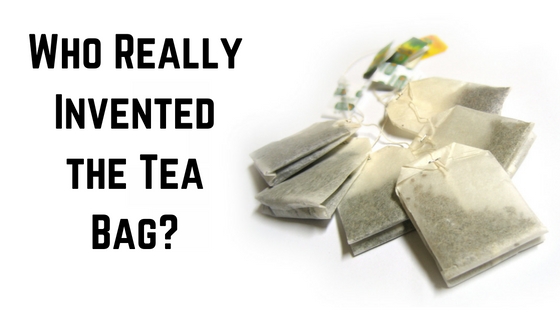 Thomas Sullivan was a tea seller from New York City. He credited as the inventor of the tea bag in nearly every tea book that I’ve ever read. I’m sure you’ve all heard the story too. The year listed depends on the source so let’s just say it was around 1908. He had his wife sew tea samples into silk pouches before sending them off to customers. Customers mistakenly brewed the tea inside of the sacks and it was so convenient that the orders started pouring in. Another version says that Thomas stumbled upon the idea when he received a sample from a Chinese vendor in a silk pouch.

Tea lore is often based more in fairytales than fact (Shennong, et al.) and I had a feeling that would be the case here. A global game of telephone stretching across centuries going to get a few details wrong. I know and love many of these legends yet I also take them with a grain of salt. For those who really want to know my advice is always to do research and draw your own conclusions.

The Proof is in the Patent

According to William Uker’s All About Tea, Volume 2 the first individual tea bag patent holder was A.V. Smith of London. I’ve done quite a bit of searching but I have not been able to back that up. However, I did find that Roberta Lawson and Mary Mclaren of Milwaukee, Wisconsin have old Thomas beat by a few years. They filed a patent for their mesh fabric “tea-leaf holder” in 1901 and it was approved in 1903. The following is an excerpt from the application.

Heretofore it has been common to prepare tea-the infusion so designated-by putting a quantity of tea-leaves in a pot and pouring hot water thereon,thus providing a considerable supply of tea, from which a cup of tea was to be poured or drawn off for individual use. This practice involves the use of a considerable quantity of tea-leaves to prepare the desired supply of tea, and the tea, if not used directly, soon becomes stale or wanting in freshness,and therefore unsatisfactory,and frequently a large portion of the tea thus prepared and not used directly has to be thrown away, thus involving much waste and corresponding expense. To obviate this, our object in the present invention is to provide means whereby a small quantity of tea, so much only as is required for a single cup of tea, can be placed in a cup and have water poured thereon to produce only a cup of tea fresh for immediate use.

Thomas Sullivan may not have been the inventor but he may have been the first to successfully market tea bags. Why else would we all still remember his name? Given the time period, it was also unlikely for two women to receive credit for inventing much of anything.

While we’re on the topic of tea bags, I thought I’d also share this picture from Uker’s All About Tea. I, for one, am very glad that we’re no longer using cellophane.

As I was writing, I couldn’t help but envision Robert Godden ranting about finally knowing who to blame for blasted teab*gs. I’m sure those of you that know him will be doing the same.