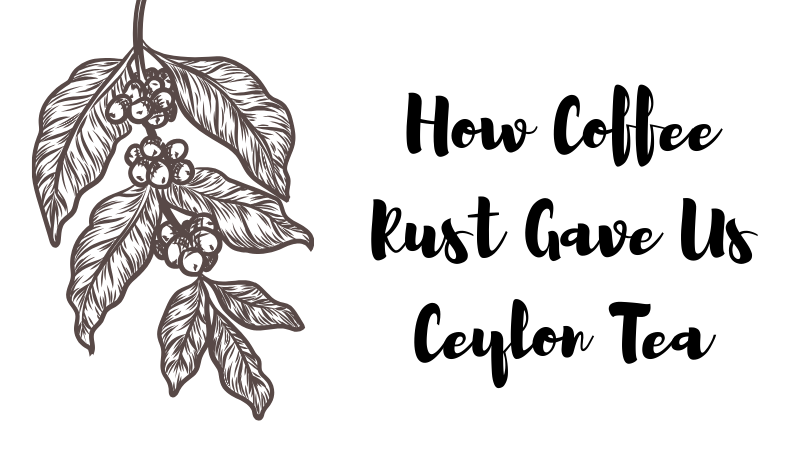 Sri Lanka, formerly known as Ceylon, is well known for its tea today but did you know that at one time they were one of the world’s largest coffee producers? The story of how Sri Lanka transitioned to tea is one that I have always found fascinating.

Coffee is not native to Sri Lanka but it is believed that it was first introduced by traders in the 17th century. The Dutch attempted systematic cultivation but it was the British that really put production into overdrive. Ceylon’s agriculture was focused on spices and sugar cane but as the coffee exports grew, a rush of investors flocked to the island. Vast areas of rainforest were cleared to make way for coffee plantations. This time period is often compared to the gold rush in California and Australia. Ceylon recorded its highest ever coffee export in 1868.

All of the prosperity that sprang from coffee would soon come to a screeching halt. In 1869 the first signs of Haemelia Vastatrix, also known as Coffee Rust, were spotted in outlying estates. This fungus causes dusty, rust-like patches to appear on the underside of leaves. This eventually leads to the leaves falling off completely. At the time, there was no effective treatment to fight the disease.

Each year the plants became less resistant to Coffee Rust, eventually leading to their death. The planters dubbed Hemileia Vastatrix “Devastating Emily” because of the financial hardships that it caused. In 1870 Ceylon exported 100 million pounds of coffee. By 1889 that production fell to just 5 million pounds.

The Rise of Tea

Tea had been experimentally planted in Ceylon as early as 1824 but a real attempt to grow tea there did not happen until 1867. James Taylor established 21 acres in Field No. 7 at the Loolecondera estate in Kandy. A working tea factory was set up there in 1872, including a rolling machine of his own design. That year the first sale of 23lbs of tea was sent to England. By 1888, the acreage of tea in Ceylon exceeded what had previously been coffee plantations.

As the tea industry in Ceylon grew, larger companies started taking over the smallholder farms throughout the island. Sir Thomas Lipton was among those who started snapping up plantations to build his empire. His favorite was among them was the picturesque Dambatenne. The tea Lipton made in Ceylon was sold with the slogan, “Direct from the tea gardens to the teapot”. His development of a consistent tea brand would change the face of the market for years to come.

James Taylor is considered the father of tea in Sri Lanka but some would say he was also a victim of that success. He was dismissed from the Loolecondera estate and passed away a year later in 1892. He was buried in Kandy and his gravestone reads, “In pious memory of James Taylor of Loolecondera Estate Ceylon, the pioneer of the cinchona and tea enterprise in this island, who died May 2, 1892, aged 57 years”.

Ceylon gained independence in 1948 and officially changed its name to Sri Lanka in 1972. By then Ceylon tea was already a household name so the monicker was kept for fear that it might hurt sales. Sri Lanka is now the fourth largest tea producer in the world, third-largest in terms of area planted. While commodity tea represents the majority of production there, specialty tea is providing a new direction. I’m a fan of the teas made by Amba Estate in particular.

Coffee production in Sri Lanka has been showing signs of revival but it is nowhere near where it was at its height. We now know that monoculture farming without shade trees is part of what allowed the coffee rust to spread in such a devastating way. That is a lesson to be learned by both the tea and coffee industries for the future.