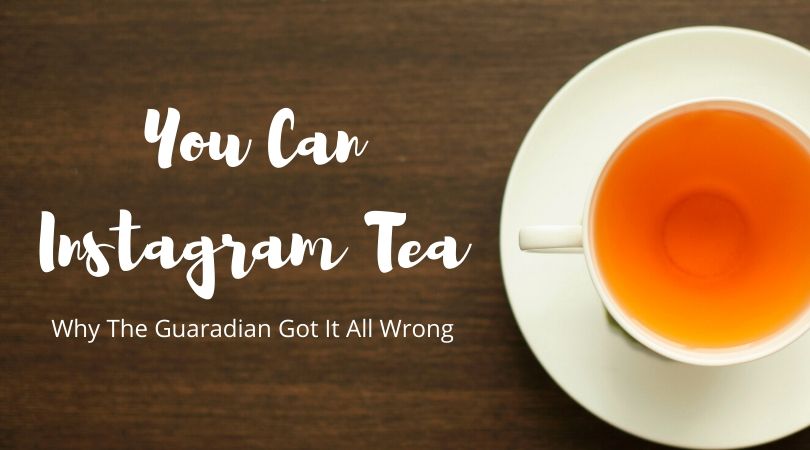 I’m sure that I’m not the only tea enthusiast who was annoyed by a recent article from The Guardian. The headline claimed that tea isn’t Instagramable. Of course, those of us in the know could have told them that nothing could be farther from the truth. I’ve seen this article shared so often that I felt a need to write my own rebuttal.

Tea Bags Have Seen Their Day

First, I think it is important to consider the context of this article. It discusses the potential sales of PG Tips and Lipton due to lagging sales. The traditional British “cuppa” is certainly seeing a decline. Coffee and herbal blends that are perceived as healthier seem to be the preference of younger age groups like millennials and gen z. There is also now a lot of concern about microplastics that might end up in our cups from teabags.

The problem with this perspective is that it only tells part of the story. Low quality, commodity tea is what is no longer in high demand. A soggy paper bag on a string isn’t exactly the most exciting thing to share. The good thing is, there is so much more to tea than that!

I created an Instagram account for the blog in 2012. Back then, Twitter and Google+ were where everyone talked about tea. One thing I noticed was that the audience I interacted with on Instagram was more international than on other forms of social media. Communicating in pictures meant that language didn’t matter as much.

Over the years, the online tea community seemed to move over to Instagram more and more. It is a close-knit community of like-minded folks who love to share with others. My feed is always full of friends who are having tea with each other by mail, video chat, or in person. Gongfu is definitely the preferred way to make tea among this crowd but there’s no snobbery. Tea in all of its various forms is celebrated and enjoyed (including the lowly tea bag).

The headline is meant to draw us in with clickbait. However, a quick search of relevant hashtags would have shown that there are a lot of people posting about tea on Instagram. #tea has over 30 million posts alone. I regularly use about 15 tea-related hashtags whenever I post.

I now have over 13,200 tea-loving Instagram followers. Since the article focused on the United Kingdom I thought it might be interesting to look at some of my own statistics. According to Instagram’s insights, the UK is the second most common location among them all. London is the second most popular city. I also took a look at my blog’s traffic. Over 2,000 visitors from England, Scotland, Wales, and Northern Ireland have browsed Tea for Me Please in the last year. The majority of those people got here by searching various tea topics on Google.

Not too shabby for something that you can’t Instagram!

Do you Instagram your tea? Were you as annoyed by this headline as I was? Tell me about it in the comments below!