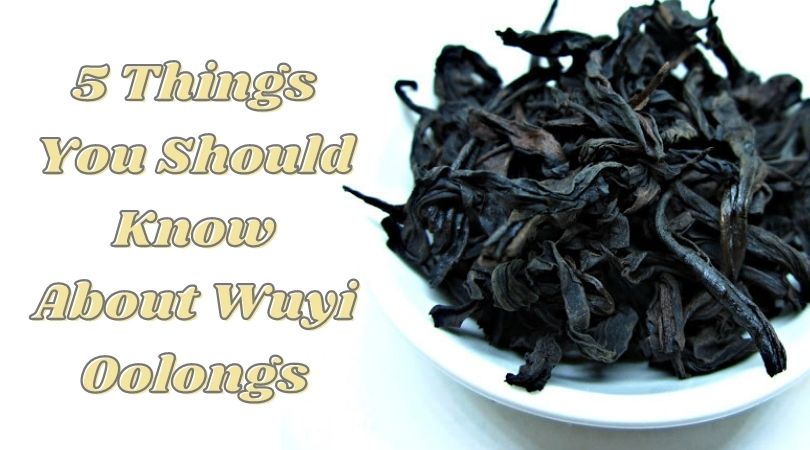 Rock tea. Yancha. Wuyi oolong. Whatever you choose to call them, the oolongs made in the Wuyi Mountains of China are among some of my favorites. They’re a perfect choice when you’re craving a darker tea with a comforting toastiness. Here are 5 things every tea drinker should know about Wuyi oolongs.

1. The Wuyi mountain range is a UNESCO World Heritage site.

Wuyi oolongs can only be made in the Northern Fujian mountain range that is their namesake. This region was named a UNESCO World Heritage site in 1999 for its cultural value, scenic views, and biodiversity. It is interesting to note that unlike most other oolong production areas the tea here is not grown at high elevation (only about 700 meters). That doesn’t mean they aren’t good quality though! The traditional growing area for Wuyi oolongs is called Zheng Yan and it is carefully protected. Older trees within this area are referred to as Lao Cong. These teas will fetch a much higher price tag but buyers need to be aware that fakes abound in both China and abroad.

You might also see this type of tea called yancha, or cliff tea. The soil on the cliffs where it is grown imparts a mineral taste to the tea that is known as yan yun (rock rhyme). A tea’s price tag often has a lot to do with exactly where it is grown within the Wuyi region.

Zheng Yan refers to teas that are grown within the very small production area inside of the national preserve. This region is carefully protected and no pesticides are allowed within its borders. The soil here is considerably rockier, making it rich in minerals. You’ll often see these teas called “true cliff”.

“Half cliff” teas are called Ban Yan. It doesn’t mean that these teas are bad but they are considered less desirable because they are grown outside of the innermost area of Wuyi. The mineral quality that Wuyi oolongs are known for will be less noticeable. I’ve found that they also don’t last for as many infusions as true cliff teas. On the plus side, they are usually less expensive.

Teas grown on the banks of  Nine Bends River, which borders the Wuyi preserve, are called Zhou Cha. This tea will be of lower quality as it is grown on flatter land rather than the cliffs that Wuyi tea is defined by. Wai Shan describes the teas that are grown beyond the riverbank area. These are the least desirable Wuyi oolongs and are more likely to be produced in a

Da Hong Pao is arguably the best-known Wuyi oolong. You’ll find articles at various news outlets proclaiming that it is more expensive than gold. While it is a wonderful tea, most of what you’ll find on the market are blends that are pretty far removed from the original mother trees. Luckily for us, many other Wuyi oolong varieties are worth exploring.

Shui Xian, aka narcissus or water sprite, is the most widely cultivated so it can be a great place to start. You’ll even find tins of it in Asian grocery stores here in the U.S. (though you’ll likely be better off sourcing from a trusted vendor). Tie Luo Han, aka Iron Arhat, is another variety that you should be able to find fairly easily. My personal favorite is Rou Gui, aka cassia bark, because of its subtle spicey notes. Hybrid crosses like Huang Guan Yin are also becoming more common. It is a cross between the traditional Wuyi variety Huang Jin Gui and Tie Guan Yin

4. Wuyi teas were once sold as Bohea.

Bohea is a term that might ring a bell from history lessons on the Boston Tea Party but did you know that it refers to teas from Fujian, including those from the Wuyi region? Bohea was the most popular tea during the American colonial period and it was enjoyed by the likes of Benjamin Franklin and George Washington. Oolongs were lumped in with black tea like Lapsang Souchong by tea importers so the two became synonymous for some time. During the Boston Tea Party, 240 chests of bohea tea were dumped into the harbor.

Wuyi oolongs have a fairly dark coloration, so much so that you might think they are black tea. The oxidation levels can vary quite a bit but usually top out at less than 50%. During traditional processing, the leaves are roasted over charcoal pits. The leaves are shaken on bamboo trays in between roasting sessions to ensure evenness. This is what gives them their somewhat broken appearance. Not all Wuyi oolongs will have a high roast but the ones that do will often require a rest period of up to a year. These teas are considerably more shelf-stable and connoisseurs will store them away with the intention of aging.

Do you have a favorite Wuyi oolong? I’d love to hear about it in the comments!