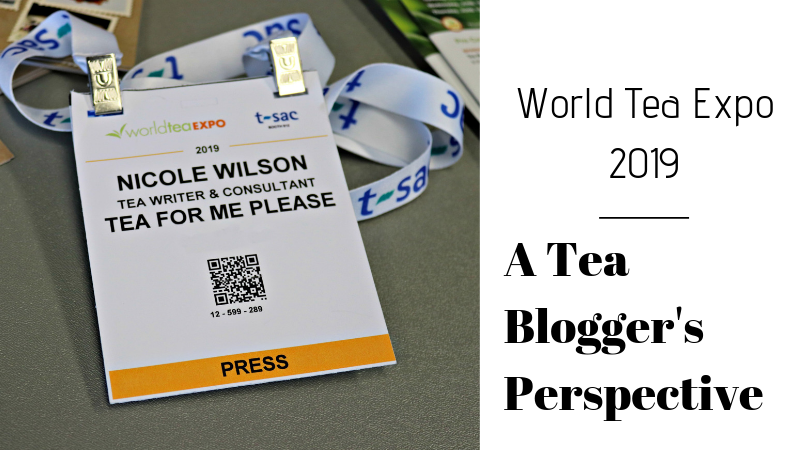 From June 11th to 14th I attended my fourth World Tea Expo, a B2B trade show for the tea industry. I missed out the last few years due to the one-two punch of my sister’s wedding and my own. The industry has grown quite a bit in just that short time frame. There’s always more work to be done but I came home feeling optimistic about the tea industry in the U.S. and where it is headed.

Transparency definitely seemed to be the buzzword on everyone’s mind. It was brought up in nearly every educational session that I attended. I also noticed a huge shift in the general attitude towards bloggers (and I mean that in the best way possible). People actually wanted to talk to us! That was not the case when I first got started writing.

The show floor was noticeably smaller this year but I don’t think that was necessarily a bad thing. There was less “fluff” quite a few new vendors. I did notice that a lot of the usual distributors like Adagio Teas and G.S. Haley did not have booths.

I did not have a lot of time to take pictures but keep an eye out for the WTE edition of the Friday Roundup. I’m sure everyone else will pick up the slack in that department.

Tea Master’s Cup judging duties interfered with the annual Tea Blogger’s Roundtable. I still savored the chance to pal around with some of my favorite people whenever I could. We are scattered across the country (and the world) so events like this are the only chance we get to see each other.

I had the honor and privilege of serving as a judge for the first-ever Tea Master’s Cup held in the U.S.A. Over the course of two days, tea masters competed in the categories of Tea Preparation and Tea Mixology. It was an amazing experience and I have so much respect for everyone who participated. It takes a lot of courage to speak in public, let alone make high-level teas and cocktails while doing it. Their creativity and passion for tea were absolutely contagious.

I was excited to see two different booths featuring unsweetened RTD (ready to drink) cold brew iced tea. What’s even more awesome is that both of them had real, actual tea leaves in the bottle! Both companies are new to the market but I know that I would grab these in a heartbeat if I saw them in a store. WholeFoods and TJ’s, are you paying attention?

One of the highlights of this WTE was attending a special Rare Tea Tasting led by Kevin Gascoyne of Camellia Sinensis. When the doors opened we were greeted by a conference room that had been completely transformed. The lights were low and all of the tables were covered in electric candles. Chris Olson composed a soundtrack of ambient music that was designed to specifically pair with the teas. It was quite unlike anything I had ever experienced.

We were served six special teas over the course of two hours. For the first five selections, Kevin asked that we stop ourselves from analyzing the taste or trying to guess what they are. Slowly but surely everyone began breathing deeper and focusing on how the tea made us feel. The rhythm of the tasting became a bit like sitting meditation. I was very much reminded of an amazing candlelight hot yoga class I took once.

The Scents of Tea

One of the things I was most excited to see at the show was the debut of The Scents of Tea. It is a science-based aroma kit that was made using the actual scent chemicals that develop during tea processing. Ultimate tea nerdery! I preordered the Enthusiast Kit which comes with 18 aromas.

Did you go to World Tea Expo this year? What was your favorite part? I’d love to hear about in the comments below!

Stay tuned on Wednesday for Part 2 of my World Tea Expo experience!