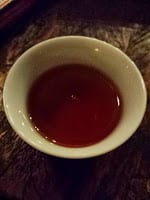 Thanks to a beautiful ocean view I actually woke up early, despite not being a morning person. I’ll go ahead and confess right now that I majorly failed at taking enough pictures. What can I say, lovely people and tea as far as the eye can see are distracting.

The Need for Standards for Specialty Tea
First on the agenda was a panel that I felt was very important for the industry. The tea industry in general lacks standards of quality which can make it very difficult for consumers to discern what is good tea. I overheard several booths proclaiming to have the best tea. That simply is not possible (especially if your tea is delivered in the form of a tablet or other form of convenience). +Austin Hodge led a group of industry leaders in a lively and at times controversial discussion. A panelist who represented Darjeeling tea growers was vehemently opposed to standards as he felt that they were impossible to establish. Although I don’t agree completely, he had some very valid points that gave us all food for thought. Jennifer English of Food & Wine Radio Network was able to provide some great examples from the cheese and wine industry while +Dan Bolton provided insights from specialty coffee. +Elyse Petersen‘s direct trade perspective as also an integral part of the discussion. While there were more questions raised than answered, I think it is very important that the conversation was at least started.

To stay up to date on this initiative, check out the International Specialty Tea Association.


Dan Robertson of World Tea Tours made a very interesting presentation on utilizing culture when selling tea. I really liked that his angle was an educational one rather than encouraging cultural appropriation. I see a lot of companies here in the U.S. get into tea because it is trendy but they rarely have a background in this aspect of the leaf. Every cup of tea has a story and its important that retailers share that with their customers. His slides were full of beautiful pictures from his travels throughout India, China and Japan.


The moment of truth arrived and it was time to take the stage with a fabulous team of fellow bloggers. +Geoffrey Norman and I were very nervous but +Jen Piccotti and +Jo J both maintained their usual poised composure. The topics ranged from how to choose a blogger to fit your brand to follow up and compensation. We each gave examples of some of our best and worst experiences in dealing with tea companies. I was a little worried because there were no questions from the audience but after the talk was over we were overwhelmed with greetings and questions. Many of the attendees were very new to the biz and I hope that our talk will help them get off on the right foot.

+Nicole Schwartz of Amazon V did a great job of recording everything. She also snapped the picture below, one of the only ones I’ve seen where my eyes weren’t closed.

After our panel I almost completely forgot that I had an appointment to stop by Teforia. I can’t tell you what I saw (yet!) but it was awesome. I browsed the floor for a bit with +Geoffrey Norman before we headed to the networking reception. It was a disappointment compared to last years but we did get to rub elbows with the likes of +Lisa Kunizaki, +Katrina Ávila Munichiello and +Tony Gebely for a bit.
The afterparty is always where the real fun happens and this evening was no different. Wednesday was community night and +Tealet held an epic backyard tea tasting. We sipped some new to me teas like Hawaiian Spring White and an incredible Jin Jun Mei as well as old favorites like Doke Black Fusion. +Rie Tulali did a great job of educating everyone in a fun and approachable way. The weather was very un-California-like this week so we were all quite chilly. That just meant that the tea partying moved indoors.

A ton of other people dropped in throughout the evening, including New York friends +T Shop and +Tiny Pinecone Teahouse and Bakeshop. We watched videos from +Tealet‘s recent trip to Nepal while tasting some of the incredible teas that they brought back with them. Being tea drunk and seated on floor cushions while listening to Taiwanese tea producers experiencing these teas was an amazing moment that I won’t soon forget. I went to bed that night marveling at the incredible connections that come from a single plant. An entire expo center full of people were all there for the same reason.