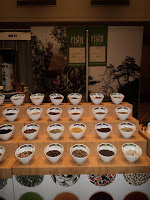 This past weekend I had the pleasure of attending World Tea East in Philadelphia. Since Philly is so close to home I opted to travel by bus and to just go for the day on Saturday. I have to admit that when I first arrived I was a little disappointed to see how small the expo was. In hindsight, that was part of what made it so great. Instead of running from booth to booth in a harried crowd, there was time to have meaningful conversations with some wonderful people. Just outside of the exhibit hall, Artist Michele Brody set up her Reflections In Tea art project. It features a tea house made out of copper pipe with walls made out of paper t-sacs. Show attendees were asked to write hopes or prayers for those affected by the recent tsunami in Japan and donations were also collected for that same purpose. It was lovely to take a time out to sit in the tea house and enjoy a cup of tea. I wandered the aisles a bit and then my next stop was the oolong tasting at Teas Etc.’s booth. I sampled some really great teas, including a nice aged dong ding. They were also kind enough to let me sample a sixty year old puerh that was AMAZING. I love meeting tea people that are enthusiastic about what they do and the crew there definitely fit the bill. The rest of the expo was a blur of sampling teas and talking shop. Many of the companies were very generous with samples and there will definitely be lots of reviews coming soon. I promised myself that I wouldn’t buy any tea since I already have way too much (if that is at all possible). I did buy a cute tea wallet from Thistledown Cozies and the latest issue of Art of Tea.

As I heard a lot of people say during the expo, tea people are some the nicest most laid back people you will every meet. After the expo was over, I got together with several friends from twitter at Tbar. I had a rather yummy honeybee latte. It was a great pick me up after all of the walking that I did. After that it was time for the long bus trip home. Even though I was exhausted and a bit over-caffeinated, I’m really glad that I made the trek.