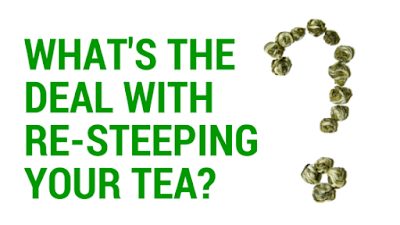 The question asked most often on the forums that I frequent has to do with how to re-steep tea. Somehow I made it six years without actually answering it here so I thought that it was about time. First things first, what is meant by the word re-steeping? It simply means getting more than one cup out of the same batch of leaves. For a lot of us in the western hemisphere that is an entirely new concept.

How Does It Work?

At its most basic, re-steeping simply requires setting the strained leaves aside until you are ready for a second cup. All of the water should be removed from them in order to avoid bitterness. Every tea is different but you can increase the brewing time in order to extract enough flavor.

If you’re brewing in a western fashion, most unflavored teas can yield two to three infusions. Eastern style brewing (a la gongfu with gaiwans or yixing teapots) is a whole other story. I’ve had puerh and oolong that gave well over 10 infusions. A higher volume of leaves is used with a smaller volume of water, extending the life of the leaves.

How long can I let the leaves sit? Can they be brewed the next day?

It’s really a matter of personal opinion but I try to use the leaves within a few hours. When I do leave them sitting, I’ll put the cover on the gaiwan to keep them from drying out. Once the leaves have dried out there really isn’t a way to revive them.

There have been times where I started a session with a tea that I knew had a lot of infusions in it. Isn’t it the worst when life interrupts good tea? In that case, I place the closed gaiwan in the refrigerator. Make sure that there was no stinky food inside that would ruin the tea. When I’m able to get back to the tea I do a few quick rinses just in case.

I would not be inclined to use leaves that have been sitting for longer 24 hours. Since they are moist used tea leaves make an excellent breeding ground for mold and bacteria. As heartbreaking as it is to throw out seemingly good tea leaves, I don’t think it is worth the risk.

If I’m not able to get back to drinking in time, I’ll make a batch of cold-brewed iced tea instead. Just throw them into a mason jar full of cold water and place it in the fridge. I’ve found that oolongs work really well for this.

Will it work for flavored teas or tea bags?

Unfortunately flavored teas and tea bags are usually a one shot deal. Almost all of the flavor goes into the first cup. There will be very little left for a second one. The one exception to that might be full leaf pyramid style tea bags. The smaller the leaf particles are, the less likely it is that you’ll be able to re-steep it.