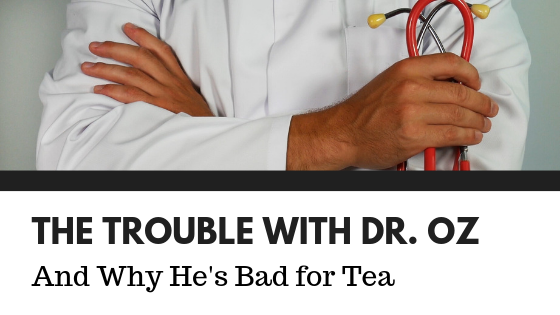 There’s something that has been troubling me for a while and I was happy to see that Congress agrees with me. I am completely unable to watch The Dr. Oz Show because I cringe every time he touts tea as a miracle weight loss cure. The claims that he makes are outrageous and in many cases downright bogus. There’s no doubt about it, this man has some serious power. Many tea retailers have told me about their experiences with the “Oz Effect”. Now you might say to yourself, “He’s promoting tea, what’s so bad about that?”.

Telling your audience that they will drop a dress size just by drinking tea is setting them up for failure. Without a change in lifestyle, weight loss does not happen that easily. Obesity would not be an issue in this country if this was truly the case. Even worse is telling them that drinking a particular type of tea will cure or prevent disease. Then there’s the episode where an expert shows everyone how to make matcha incorrectly.

Every time he talks about a particular tea, people run out and buy it. Unfortunately, he doesn’t show them how to make the tea properly and most of the examples shown are tea bags. An uneducated consumer purchasing a tea solely for the potential weight loss benefits is a recipe for disaster. This is especially true of unusual or temperamental teas like puerh. If the tea purchased is poor quality and they brew it incorrectly, the consumer will force themselves to choke it down for a few days before giving up. They’ll be led to believe that they just don’t like tea.

Tea and the culture around it are still in their infancy here in the states. We’ve come a long way but there is still a lot of work to do. There is so much misinformation out there and the last thing the industry needs is a talking head as powerful as Dr. Oz to spread even more of it. Here are some things that would help him step up his tea game:

Tea is a healthy thing in and of itself. This goes for every single category. The healthiest tea is the one that you enjoy because you’re actually going to drink it. Much like a New Year’s resolution, forcing yourself to do something will never last. Don’t make tea the treadmill that holds your clothes.

I’d love to hear your thoughts on this issue. Let me know what you think in the comments!