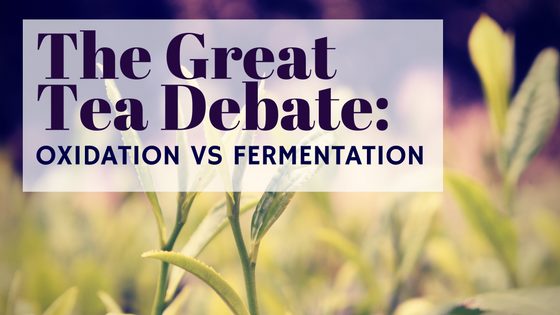 When I first started drinking tea everyone referred to the changes that occur in tea during processing as fermentation. It has become a bit of a raging debate as to whether oxidation is accurate. Now, what exactly do these terms mean? Fermentation is a metabolic process where sugar is converted into acids, gasses, and alcohol. It usually carried out by an agent such as bacteria and yeast. Fermentation can occur naturally but humans learned long ago how to manipulate this process in order to make alcoholic beverages like beer and wine. Unless we are referring to kombucha, fermentation is not what is occurring during the manufacture of most tea. Oxidation is an enzymatic process that as the name implies, requires oxygen. This is similar to what happens to the way an apple slice turns brown when it is exposed to air. Polyphenols in the leaves absorb oxygen, converting them to polyphenol oxidase (PPO). PPO is responsible for the creation of thearubigins. This substance gives black tea leaves their reddish color as well adds depth of flavor. Applying heat to the leaves halts the process of oxidation.

I was working for a French tea company and tried to explain to them that fermentation is not exactly accurate. My superiors replied that in France, oxidation is considered a chemical process while fermentation is considered a biological process. I suppose this makes sense when we consider that iron rusting is also a type of oxidation. They believed that this cultural bias would affect whether or not consumers believed their product to be natural. Perhaps this is part of the reason why there is still so much confusion in the tea world. I believe there are also issues with translating Chinese terms into English that may have played a part.

Puerh is one of the few exceptions to this rule. Shou, or cooked puerh, is inoculated with bacteria to initiate fermentation. The process is similar to the way that mulch is created. There is some debate about whether sheng,  also known as raw puerh, is truly fermented. Some categorize it as a green tea for this reason. However, there is some bacteria action involved when a tea is aged, particularly in humid storage.

This is a very simplified explanation of a complex topic. An entire book could be written on it but hopefully, this will help to clear some things up. It is my hope that the industry will eventually come to a consensus about using oxidation rather than fermentation. It’s important for educational purposes both for those in the biz and for consumers, particularly in the United States where we are already so behind the rest of the tea-drinking world.