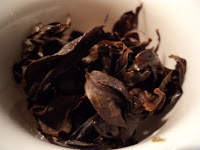 I think making your own tea is something that every tea lover dreams of. Since traveling to China or India isn’t possible for me right now, I didn’t think that I would be able to make that happen until the very distance future. That is, until I discovered +Boston Teawrights. They have made it possible for tea lovers to craft their own teas at home using fresh, raw Taiwanese tea leaves. Let the tea nerding out begin!

Green teas require a steamer so I decided that I would attempt a black tea. The night after I received my shipment, I couldn’t get to sleep. This may or may not have had anything to do with the bag of tea leaves in my refrigerator. I decided to start my tea crafting at about 1:30am on a Friday. The first step was to wither the leaves. I spread them on a cookie sheet lined with wire cooling racks and left them to do their thing for the next 12 hours.

Once the leaves were finished withering, it was time to remove the long stems. This took quite a long time and it gave me a new found respect for those who do this day after day.

The next step was to roll the leaves in a cheesecloth. Having watched countless tea processing videos I had a vague idea of how this was supposed to work. Boy did it take a lot of elbow grease! I was afraid of breaking the leaves at first but they were pretty resilient. My family thought they smelled like dirt but I thought the leaves smelled amazing.

After rolling, the leaves needed to oxidize. This is the main process that determines the type of tea. I lay them back out on the cookie sheet and covered them with a hot, damp cheesecloth. They were left for about 3 hours. I had run out of time for this batch but would like to experiment with multiple rolling and oxidization steps in the future.

The taste was….just ok. It was mild and really more like an oolong than black tea. There were some very faint floral notes and a mild toastiness. I may try roasting the leaves a bit more to see if that will deepen the flavor. I’m also going to be re-tasting over the next few weeks because I have a feeling that it the taste will change a bit. While it wasn’t the best tea that I’ve ever had, it felt amazing to drink a tea that I made with my own two hands. Practice makes perfect and I will definitely be trying this again in the future. All in all this was a really fun experiment and I am so glad that I had the chance to give it a try.

You can find out more about Boston Teawrights here.