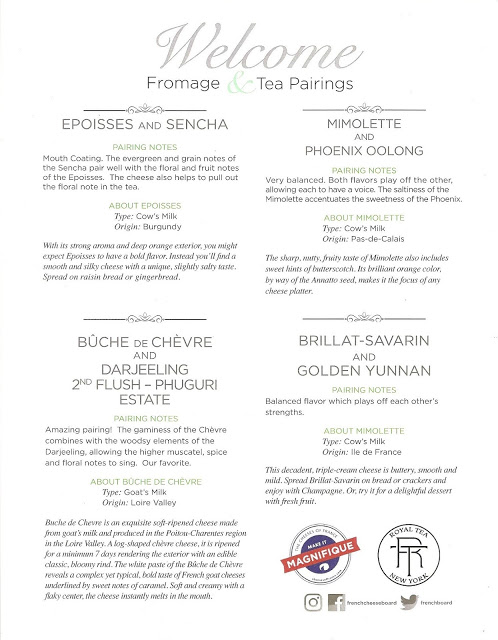 Tea blogging isn’t the most glamorous of niches but every once in a while I get invited to something that makes all of my friends jealous. Last week I attended a fantastic tea and cheese pairing event put together by The French Cheese Board and Royal Tea NY. I have no idea how I have gone this long without knowing about this studio devoted to all things French cheese. They had me at brie! I was the first guest to arrive which gave me a chance to talk shop with Ravi from Royal Tea NY. It was also a perfect time to indulge in some deliciously cheesy appetizers (along with a glass of white wine).

I was pleasantly surprised when fellow tea bloggers +sara shacket and +Natasha N walked in. They both have fantastic palates so I really appreciated being able to compare notes with them as we went through each of the pairings.

Read Sara’s write up here: An Evening of Tea and Cheese at The French Tea Board

Read Natasha’s write up here: #MakeItMagnifique: Tea and Cheese at The French Cheese Board in SoHo

The first pairing of the night was Époisses and sencha. Our hosts explained that this cheese is from the Burgundy region of France. The rind is washed with Marc de Bourgogne, giving it a distinctive reddish color. I had never heard of this liquor before but it is a type of brandy that is made out of pomace, the waste materials that are left over after making wine. Japanese green tea can be a bit tricky to pair foods with but this combination worked amazingly well. The sencha was an asamushi style from Chiran in Kagoshima Prefecture. Although light bodied, it packed a lot of umami. The creamy notes of the tea matched the silky texture of the Époisses.

Next up was Mimolette paired with a Phoenix oolong. This is a hard cheese that is produced in Pas-de-Calais. Not only was this combination delicious but it also gave us a bit of a history lesson as well. This cheese was originally invented at the request of King Louis XIV in order to replicate a popular Dutch cheese called Edam. The rind is full of pockmarks that are created by cheese mites. It was a bit sharper than I was expecting but it also had a natural sweetness that I really enjoyed. The tea selected was an aromatic and enjoyable Mi Lan Xiang, or honey orchid fragrance. Dancong oolongs can be very tricky to brew but this one had been prepared perfectly. The charcoal roasting of the tea along with its fruity and floral aromas matched well with the nutty and fruity notes of the Mimolette.

The next selection paired an organic 2nd flush Darjeeling with Bûche de Chèvre from the Loir Valley. This was our only goat cheese of the night and it came in a large log. The taste was creamy yet pungent and was balanced well by the fruity character of Darjeeling. I’m usually not a fan of goat cheese but this one wasn’t overly gamey as they sometimes tend to be. The tea was lightly astringent with a brisk and refreshing finish. I have not tried anything from the Phuguri Estate but I definitely want to explore their offerings a bit more now.

The final pairing of the night was a Brillat-Savarin and Golden Yunnan black tea. It is a very soft triple-cream cheese. It garnered oohs and ahs from everyone at the event even before we took a bite. It was so creamy that it looked like almost like a smear of Irish butter. Holy cow was this stuff good! The Golden Yunnan was super chocolaty, so much so that it felt like I was eating chocolate cheesecake. It also had all of the caramel and yam-like notes that I look for in a Dian Hong.
I’d like to thank The French Cheese Board and Royal Tea NY for a wonderful evening. They sent us home with goody bags which included a ton of information about cheese as well as a bag of that delicious Golden Yunnan. I went home inspired to try to put together my own pairing event.