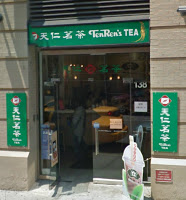 On a recent trip to NYC I happened upon a little tea shop, Ten Ren’s Tea and Ginseng Co., at 138 Lafayette Street. It was small but well stocked with many different kinds of Chinese and Japanese tea. There was also plenty of herbal teas such as Ku Ding, lavender and ginseng. They served bubble tea but I didn’t partake since that isn’t really my thing.

The staff was quiet and unobtrusive. I wasn’t in a buying mood that day and they just let me do my thing. I was most attracted by the teaware. They had a small army of yixing pots that were fairly inexpensive, especially for the city. I was also very excited by the tiny gaiwans that I spotted in a glass case. There was a station with a table that is presumably used for tea ceremonies. I’m really curious to see their other locations and will definitely be trying to stop in again soon.