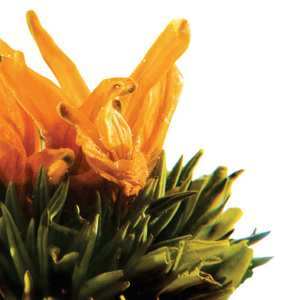 This tea was sweet, floral and almost apple-like with a lingering aftertaste. There was very little astringency. As flowering teas go it’s pretty decent as far as the amount of flavor. This tea had two detractors though. The first being that the ingredients were not clearly stated on Tea Beyond’s website. As best as I can tell there is white tea and osmanthus (which they refer to as sweet olive). Beyond that I am at a loss as to what it was I was drinking. The second being that I really don’t like lots of teeny tiny petals floating in my tea. That being said, you really can’t expect too much from a flowering tea. They are great for when you have guests over but they’re just never going to be as good as a high quality loose leaf tea.